It’s Monday and many men are counting losses of the weekend. Those who bought alcohol without getting some punani in return are probably the most miserable lot right about now. They fell victim to the growing pyramid-scheme of life.

Those who were lucky to “score” some, thinking that they were acquiring a bouncing-castle to sleep beside and acquire some warmth in light of the cold weather, will be surprised to realise that they also “repaid” the favour, albeit indirectly.

“Foodie” is a term being frequently used by women, to display their love for food. And not just any food, but pricy gourmet dishes that they post on Instagram, punctuated by all sorts of hashtags and ofcourse the name of the restaurant. 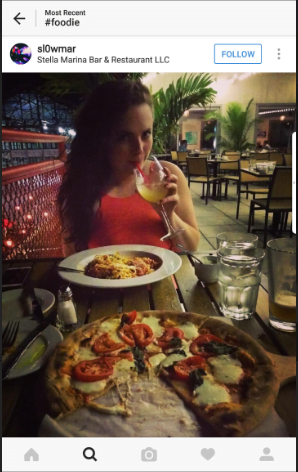 CAPTION: Woman eating in a pricey restaurant, accompanied by the usual “foodie” hashtag.

Fellows, don’t be duped by the size of a woman. Today’s Nairobi bitches eat like gluttons. Go on a date with one, and you’ll regret why you even offered to take them out in the first place. They will maneuver the menu’s with familiarity of a desert-guide. They will order a three-course offering and eat to the very last crumb.

Irony is if you offered them a cheaper nyama-plan at your local, they wouldn’t take you up on the offer because it wouldn’t make for the threshold of likes on Instagram. Talk about living beyond ones means so as to impress an audience that largely cares less what you eat or shit.

So to those who scored some punani, chances are that your fridge is empty by now. Us men can go for days without a proper meal. We can eat light like sandwiches, snacks or even fruits. But women MUST eat proper meals, and at frequent intervals. So from breakfast, the sausage packet that normally takes 2 weeks to finish will be consumed in one day. The eggs that you only eat when not in a rush to miss the bus, will be scrambled and consumed in one hit. The milk packet that lasts you a week will be emptied in a jiffy. And thats just breakfast.

Woe unto you if you had stocked some snacks because those will be consumed as she watches DVD’s of series you had acquired during the week, while you are asleep or reading the newspaper or checking your phone.

Lunch has to be grand. The 1KG meat that lasts you a week as a bachelor will be demolished in one seating. If you’re missing an ingredient from your kitchen like spices or veggies, she will whine about how miserable of a person you are, yet the basic bitch lives with her parents and doesnt have to worry about her expenses like the rest of humanity.

In the afternoon, those within the proximity of dial-a-delivery will be forced to order in for a pizza nor forgetting a cold coke, expenses that you dont normally embark on while alone. All the while she will be whining how the house is disorganised, dirty and how you need to up your game.

In the evening, she will propose sundowner drinks as you’re dropping her home, as so you will be back for more beers. Nowhere did she propose hiking at Karura Forest, sight-seeing or even visiting a children’s home.

But the item that will be depleted after a lady visits your home is nothing other than toilet-paper. Women frequent toilets more than any other room in the house, and a lady can utilise two rolls of toilet paper on one random Sunday afternoon.

So when you calculate the cost of hosting a chic in your house, the question remains; who really scored? My nigga, you were also a victim of another pyramid scheme