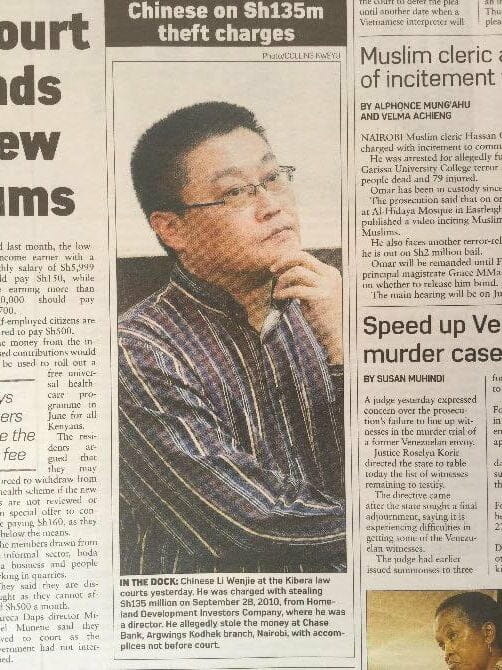 Caption: Newspaper Article showing Wenjie Li’s criminal case. This alone should have had him either jailed or deported, not walking wining and dining with Nkaiserry’s PA’s Saitoti and Gatu.

Cooperative Bank of Kenya was the bank that handled the accounts of the lawyers linked to the Chinese extortionist Wenjie Li, money that was meant to buy land for a multi-billion investment project.

The money was wired to Cooperative Bank by Chinese investors to their lawyers account, Lillian Ongweni of Ongweni and Moibi advocates, and thus Cooperative Bank would know more details on the lawyer who stole the Kshs. 290 Million. The SWIFT details are 11 9 2013 290000000 for avoidance of any doubt. Cooperative Bank of Kenya can do us a favour and inform us where Lillian Ongweni took the money because speculation is rife that she bought a parcel of land in Athi River.

Between 2013 and 2014, 35 km from downtown Nairobi, a group of ambitious Chinese investors planned a 300-acre real estate mega investment – City of Harmony. It was going to be the China city of Kenya: stores; factories; residential homes; and offices. Hundreds of Chinese businessmen were the shareholders of this project and investment flooded in from many parts of China. Kenya’s role in China’s One Belt One Road meant that a there were potentially huge profits to be made by early speculators.However, in 2015 this project ended with a lawsuit, and the City of Harmony was gone.

At some point, we have to start quantifying corruption and it’s impact in derailing investment from Kenya. Because Government officials have made it their core-business to swindle investors, and the judiciary has also been compromised making Kenya lose a lot. When a whole Interior CS like Joseph Nkaissery who we are informed has turned the Office of the President into a harlots den, where fishy deals are struck, conspires with a thief like Wenjie Li, then we have a problem.

On Tuesday July 12th 2016, there will be a hearing of the case in which Professor Guo Dong has sued Wenjie Li and obtained court orders barring access to their company accounts. Dong is currently detained in China at the Wuhou Police Station, in Chengdu City where Wenjie Li’s associates instigated his arrest, so as to compromise the outcome of tomorrow’s case Misc 264/15 Court 40.

From Kibera Law Courts to the Milimani High Court, Li Wen Jie, locally known as “Mr James”, has been mentioned in a number of cases involving questionable land deals and boardroom takeovers involving other Chinese investors.

An order from the office of the Director of Public Prosecutions to Ndegwa Muhoro was issued to provide files relating to Wenjie Li. To date, Ndegwa Muhoro has gone out of his way and frustrated the DPP’s office in their bid to conclude the matter. So many questions surrounding the character of Muhoro. So many scandals he is involved in. Honestly, how does he expect this to end?

Tomorrow, lawyer Gibson Kamau Kuria was banking on a technicality that since Professor Guo Dong has been detained thus won’t appear in court. Kuria is hoping that the judge will dismiss the case and lift orders freezing accounts at Chatham Limited, so that the remaining Kshs. 60 Million can be hurriedly withdrawn. Government officials are also waiting for the same money in the form of bribes.

How did we get here as a country? How rotten have Government officials become? That projects that can employ millions of Kenyans and create numerous opportunities for the economy, are being compromised by a few greedy individuals? Is this how we shall live in Kenya?

Meanwhile as all stolen money is re-invested in land, shall we keep lying to people that the real-estate sector is “growing” at the back of laundered money? Shame on the Government officials who compromised this project. The lawyers involved should be dis-barred by the Law Society of Kenya. Ndegwa Muhoro should be interdicted for defying the Office of Director of Public Prosecutions. Nkaissery should explain why he is blocking Wenjie Li’s deportation. 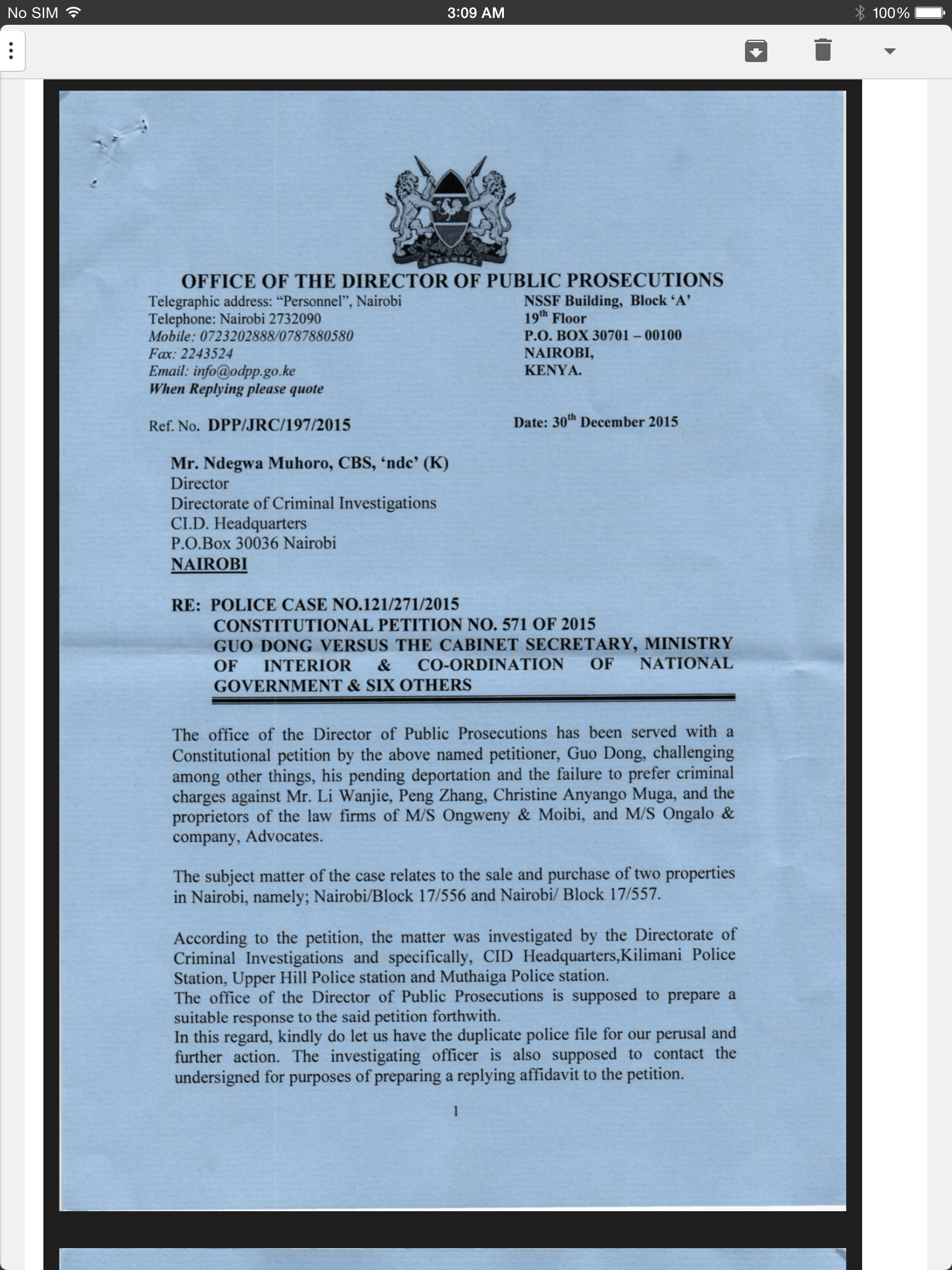 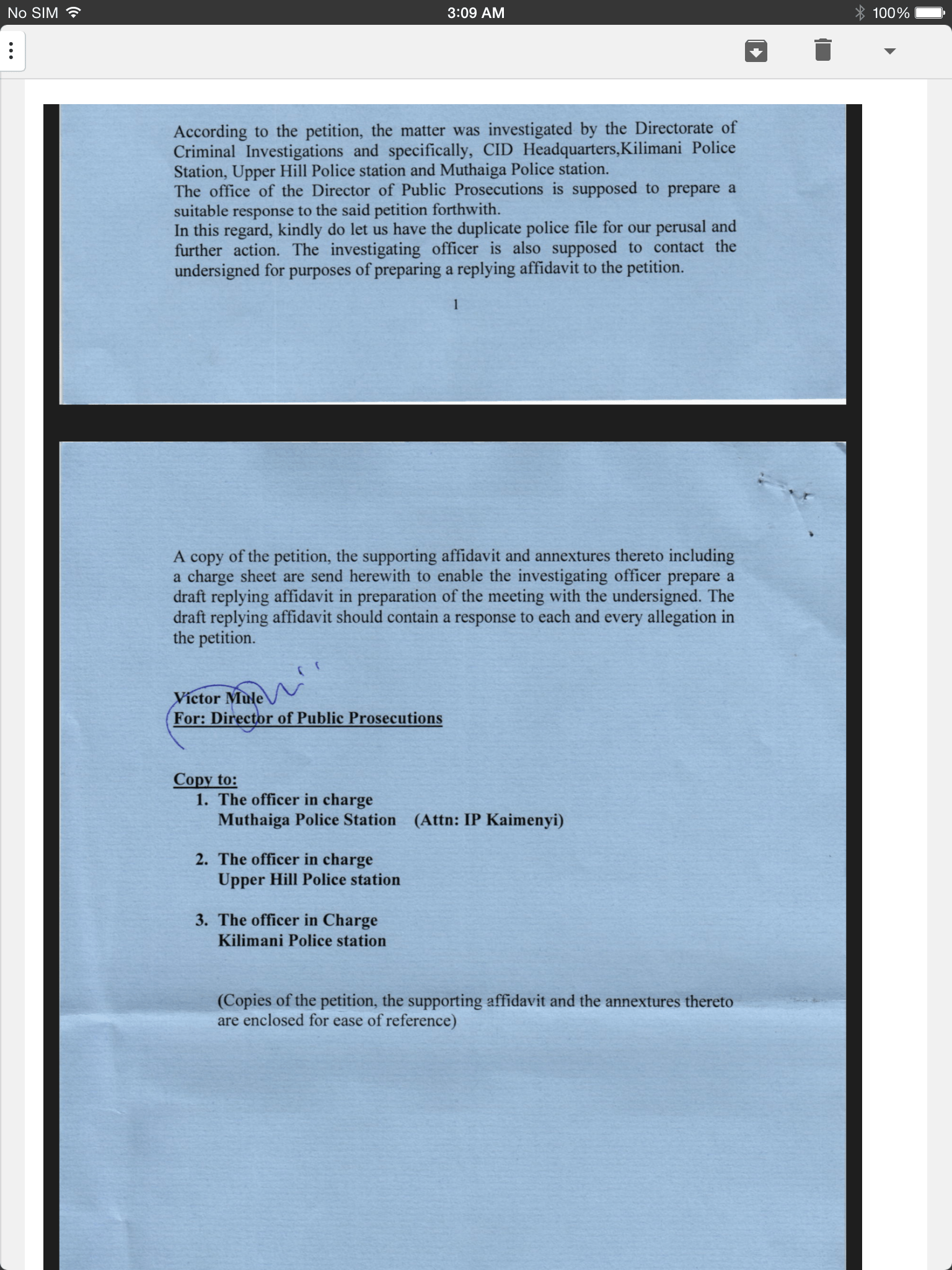