Former Harambee Stars striker Dennis Oliench has finally confirmed the rumours that have been doing rounds on social media, linking him to TV personality Paula Mumiah. The two have been posting multiple photos of their vacation at the Maasai Mara National Reserve on social media. 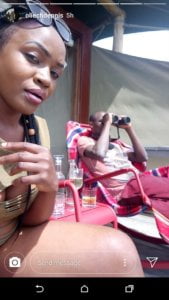 Caption: Dennis Oliech and his girlfriend Paula Mumiah at the Masai Mara

The two are believed to have been dating since his early playing days and kept their relationship under the radar until it was too obvious to hide anymore.

In one of the social media posts, Oliech took time to silence his haters who had been suggesting he was wallowing in poverty. In the post, Oliech brags of how he was paying Ksh. 164,000 a night at the hotel the two were staying at.

A local news source reported that Oliech had been with Paula since her college days at the Kenya Institute of Mass Communication and they now reportedly live together at his lavish apartment in Kileleshwa.