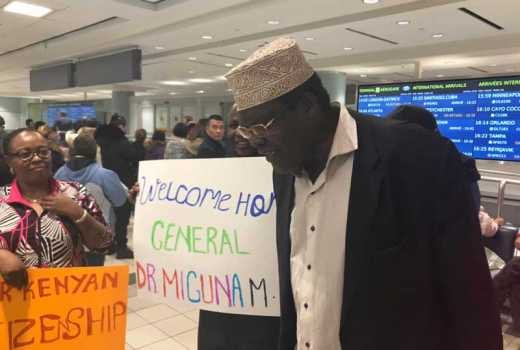 Miguna has shared a poster on his timeline showing a planned demonstration for his return set for July 1st, 2019.

Miguna was awarded Kshs. 7 million, in December 2018, as compensation for the violation of his rights during his deportation to Canada.

In that ruling, Judge Chacha Mwita said Mr Miguna’s deportation was unlawful and in violation of the Constitution.

The fiery lawyer was first deported to Canada on February 6, 2018 after police using explosives broke into his house and arrested him for his role in the January 30 controversial swearing-in of Raila Odinga as the People’s President.

He came back to Kenya in March 26th six weeks after his deportation, only to be deported again on 29th of the same month, this time while sedated.

After his second return to Kenya, Miguna suffered more in the hands of state agents.

He was detained at a toilet in Jomo Kenyatta International Airport (JKIA) for 72 hours, sedated and deported to Dubai.

This is more than why he had endured in his first arrest.

Police had forcefully gained entry into his Runda house using explosives then they took him on a roller-coaster trips to unknown locations inside Central Kenya.

These were dark times.

The government of Kenya (GoK) disregarded court orders against violations of Miguna’s rights.

The GoK deported Miguna a second time despite a court order directing the government to release him from detention at JKIA in Nairobi.

“The three are hereby convicted accordingly and should appear before this court tomorrow at 10am,” Justice Odunga had ruled.

The three didn’t even appear before the Judge, signaling the return to high-state impunity in Kenya.

Kenyans had voted to remove Kenyatta as they had been treated to KANU theatrics and high levels of corruption in his first term, but in the first weeks of his second term, he began on a more evil high.

It remains to be seen what will happen to Dr. Miguna Miguna. He has rightfully maintained that he is Kenyan and has never renounced his citizenship as reported because ‘this is his country of birth’.

The court slao declared him ‘a Kenyan citizen’

This is not even debatable since it is the truth, the courts were just resisting the impunity of the Jubilee regime under PResident Uhuru Kenyatta.

In the meantime, the July 1st demo is on. Below is the poster announcing the demo and tweet from Miguna. Will you attend? Tell us in the comments section.

Just seen this and say SOLIDARITY to the Kenyan patriots trying to do the right thing. Kenya belongs to all Kenyans. Despots don't own Kenya. Freedom, liberation and justice will never be handed over to Kenyans: they must be fought for and EXTRACTED. #DespotsMustFall pic.twitter.com/gtrZuyKKt0