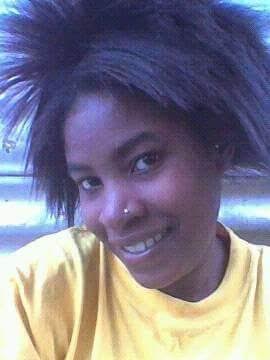 The late Mercy was suspected of stealing a phone of one of a ladies  that is operating a local salon in Fuata Nyayo-South B Estate in Nairobi. The lady then reported her to the APs camp in Marigú-iní Chiefs Camp.

Later the policemen came for Mercy and took her to the APs cell which was on Tuesday 8th March 2016 at 5pm. At that time the lady was well even told the cops to uncuf her and let her walk on her own to the station.

Some of the neighbours with the help of the former village elder accompanied her. She was then booked and locked-up. We are told that the lady spent a night in the cell.

Unfortunately, her sister received a phone call at 5 am the next morning from the AP’s camp, and the shrewd officer used the phrase “kujeni haraka mchukue hii takataka yenu…” (come quick and get rid of this garbage).

By the time of arrival, it was discovered that Mercy was in critical condition, could not speak or even move. She was then rushed to  Mbagathi Hospital where they tried to resuscitate her but to no avail. Mercy was pronounced dead hours after arrival at Mbagathi.

We accompanied the family to the Industrial Area Police Station to record a statement under OB Number 52/10/03/2016 at 15.30 hrs. It is believed that Mercy was sexually abused and now we are waiting for the medical report.

At the Police Station we met the OCPD, a Mr Langat and also the DCIO and we informed them of the need for the matter to be investigated.

Mercy death has made a one year old boy become an orphan.

Why are we still condoning extra-judicial killings by police? It’s not the first time someone has been “arrested” and ended up dead.

We now reach out to Dr. Andrew Suleh, @AndrewSuleh the CEO of Mbagathi Hopital to email us the complete cause of death within the shortest time possible. Don’t be bribed by Police to lie bwana Suleh. Be a responsible Kenyan.

We also ask you to share this article with the commissioner of Police to inform the public on what measures he is taking to improve the welfare of police officers, who clearly don’t seem committed to their jobs.

We cannot have the Government spending Kshs. 50billion comfortably on stupid CCTV camera’s so that a few people in Statehouse and Safaricom can execute a heist, looting Kshs. 30Billion and not checking into the welfare of police. This is the reason why the revolution is coming.

Finally, we want Edith Fortunate of the Office of the President to explain in clear and simple terms, the disciplinary measures taken against rogue cops like these, who take the law into their own hands.

Listen to this narration