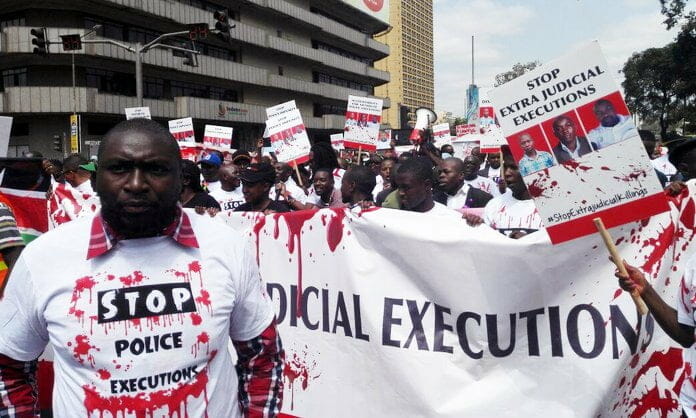 Everyday across Kenya, officers of the National Police Service extra-judicially murder innocent numbers, even as leading NGO’s, celebrity-activists and lawyers remain silent. We are shocked that you’re also shocked about this rampant practice.

For instance after I was arrested, Ndegwa Muhoro’s men have threatened me with death severally, mentioning of their close links to Uhuru Kenyatta and the fact that they enjoy his patronage. Jacob Juma stated severally that Deputy President William Ruto was plotting to assassinate him. So really, you reap what you saw. And since professional bodies and celebrity-activists opted to remain mum after deaths of other Kenyans while walking the moral high-ground (saying things like Jacob Juma was a thug who deserved to die), now you will realise that nobody is safe and that you’re all targets.

Did anyone raise issue after National Intelligence Services (NIS) informant Robert Alai shared a photo of myself being taken fingerprints at the DCI headquarters, sent to him by policemen who threatened me with murder? Your silence has actually been more suspicious than the daily extra-judicial murders being executed by the police.

Your silence in the times of oppression and tyranny will ultimately see you as victims of your own stupidity. You or your loved ones will continue being victims of impunity. The murders won’t stop as the thirst for blood often multiplies, and the thieves are often drawn to procuring more and more blood.

We recently got a letter from someone. Kindly spread the word.

Please assist the family of Jacob Komol get justice on the murder of the above 20 year old girl. The lady left home at 8am on 5/6/2016
At 10am one Steven Lobolia reported to Lodwar Police of the death. Police locked him up.
The family went to report and were told the incident has been reported. The police did not visit the incident scene to date.

On 13/6/2016 after the burial Steven called the family and told them “nimetoka na msinitafute kama nimeua au la” (I have left jail. Don’t look for me, whether I have killed her or not).

Note that this boy was the deceased’s boyfriend whom she was visiting on the fateful day. The case is near-identical to that of the British Zuku boss who murdered his girlfriend in Karen. The police are dragging their feet on this case referring the family to different offices including CID, OCPD, etc. The family feel’s that something is funny as no action is being taken.