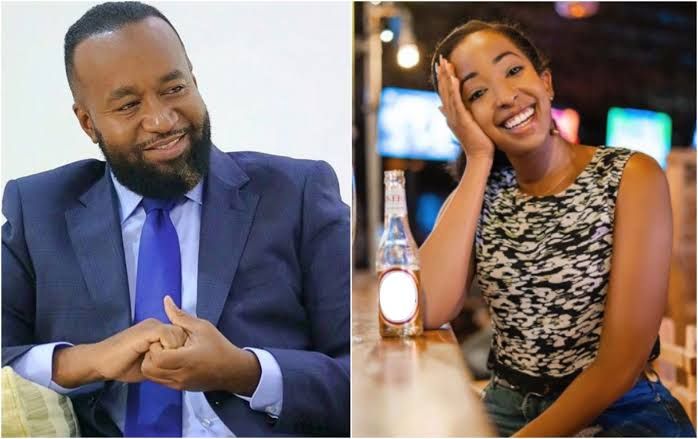 Fan-favourite Kenyan YouTuber-cum-Blogger Edgar Obare has once again found himself in hot soup after yet another of his popular scathing Instagram exposes which often focus on local celebrities and prominent politicians returned to haunt him.

On Tuesday afternoon, the outspoken “gossip guru” wrote out to his extensive audience on social media, notifying them that officers from the Directorate of Criminal Investigations (DCI) had summoned him over posts he recently made regarding an alleged entanglement between Instagram-famous lifestyle Vlogger Natalie Wanjiru Githinji a.k.a “Natalie Tewa” and firebrand Coastal politician Ali Hassan Joho.

“So yesterday, I was informed I am being summoned to the DCI. I was kindly requested by an officer to appear at the DCI HQ without fail in the next few days. I am told the purpose of this summon is to answer questions about Natalie Tewa,“ shared on the interwebs.

This comes hardly a fortnight after Obare, with the help of the ever-active “online detectives”, fingered out the travel enthusiast as the mystery owner of a particular female handbag which Kenyans On Twitter (KOT) spotted inside a posh private jet which Governor Joho and his ODM counterpart Junet Mohamed used to fly out to the United Arab Emirates.

As proof of his discovery that Natalie Tewa was indeed flown out to Dubai by Joho, Edgar Obare, in his full controversial nature, posted travel documents which revealed among other things, her full government name as well as the date and time of travel.

The information, in turn, sparked a huge debate on social media, as netizens argued over whether the blogger had crossed the line by sharing out such delicate data for the sole purpose of vindicating his argument that Joho and Natalie have indeed been sharing sheets.

In what now clearly comes off as having been a hint, Natalie Tewa herself tweeted out a cryptic message on Monday night, decrying Kenya’s “terrible culture” of “tearing other people down in the name of gossip”.

We have such a terrible culture of tearing other people down in the name of gossip. There’s already too much negativity in this world, contributing to it doesn’t improve your life or take you higher. Instead use your time wisely, because every minute of our lives counts.

Since the handbag incident, multiple speculations over the professedly hot spark between Joho and Tewa have continued to pop up online.

Last week, the lifestyle Vlogger further fueled these rumours surrounding the two with an Instagram post where she stepped out in a bright yellow long dress and captioned the post “Baby Katerina”, only for a video of Joho presumably bragging about his new catch and singing along to a popular song with the exact same words.

Just this past weekend, word also did round that the flamboyant ODM politician had allegedly gifted Natalie a sleek German machine with his trademark “001” on the license plates.

Whether this true or not, however, remains subject to confirmation. 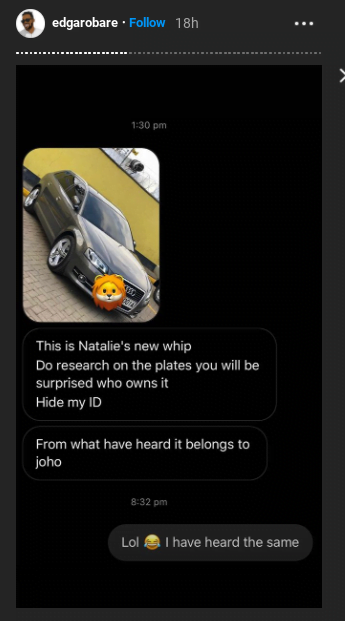 Even as Edgar prepares to face detectives, it’s quite evident that at the moment, Natalie Tewa is one of the hottest goods in the business and as a result, rightly enjoying some of life’s finest privileges (like flying in private jets and getting showered with multi-million gifts) that come with the high life of her admirers, but as history has sadly proven in the past, most if not all of these convenience-based affairs end in tears.

Be sure to check back to cnyakundi.com as we continue to cover this unfolding modern-day bodice-ripper.