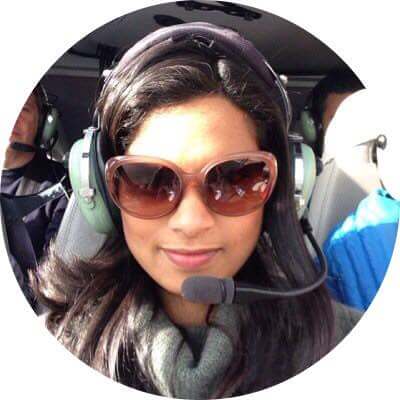 According to the masters of the universe Twitter executives, they were receiving an average of five complaints per day confirming that the account was a victim of targetted malicious reporting. Though they refused to state who was sending those complaints because Nyakundi has never received any communication from Twitter pertaining any tweet.

As we also revealed, Twitter is setting up the East and Central Africa office in Westlands as they aim to make more revenue through their advertising packages.

After the suspension of @C_NyakundiH main Account, Several Accounts impersonating me came up. People were actually sending me messages, calling and even emailing asking if I had rejoined. It was indeed a daunting task trying to clarify to all these people that the accounts were impersonators. I used my other platforms to rally for the reporting of the accounts, but Twitter never suspended the accounts.

A few days ago, I decided to write an email to Vijaya Gadde Legal, Policy and Trust & Safety Lead at Twitter. Here is the email I sent her

“I am writing to complain about the impersonation of Cyprian Nyakundi on Twitter. You guys suspended me after I came under targetted reporting. But now, you allow people to impersonate me, and the accounts impersonating me are gaining a huge number of followers

Please stop this before I take legal action ”

Vijaya never responded directly but forwarded my case to Support. This was their response

Thank you for your message. We need to confirm the username you are reporting. Please reply to this email with the exact spelling of the username. You can either provide the exact username (e.g., @safety) or a link to the user’s profile page (e.g., http://twitter.com/safety).

Thanks for getting back.

Please stop the impersonations because it is wrong since you suspended me. You should come up with ways to stop impersonations of popular figures that you permanently suspend

Twitter did take a long time to respond, despite the seriousness of the matter. I followed up with an email  to Support and copied Vijaya Gadde

Hi, Good morning from Kenya. It is sad to note that Twitter is yet to do something about the accounts impersonating me even after I made the list and sent to you. Why is Twitter like this? Impersonation is a serious matter and people not on Twitter must be protected from the Vice. I am keeping these correspondences to show how I reported and you never acted in case I want to take legal action against the hypocritical twitter ”

Review the instructions below and upload the requested documentation. Please make sure to upload a legible copy so we can review the full name and photo on the ID. This information will be kept confidential and your documentation will be deleted.

Click on the link below and upload a copy of your valid government-issued photo ID (e.g., driver’s license or passport).
If you are reporting an account that is not using the name that appears on your government-issued photo ID, you must also include documentation demonstrating that the name used by the account you’re reporting is associated with you (e.g., proof of registration of your trade name or pseudonym).
If you are reporting on behalf of another user, we will need additional documentation to confirm that you have authority to act on their behalf. Using the upload link, please provide legible copies of documentation authorizing you to act on their behalf (e.g., power of attorney, birth certificate, documents showing parental/guardianship rights of minor children) AND a copy of your valid government-issued photo ID.
Upload link: https://twitterinc.secure.force.com/[email protected]&cn=94712289

Once we have received your documentation, we will review and process your report.

Thanks for bringing this to our attention. Parody, newsfeed, commentary and fan accounts are permitted on Twitter so long as they comply with our policy for such accounts (http://support.twitter.com/articles/106373).

In response to your complaint, we’re providing the user (https://twitter.com/CisNyakundi) with instructions on how to comply with our policy. Please allow 48 hours from the receipt of this email for the user to make the necessary changes. After 48 hours have passed, you can reply to this email if you’d like to file a follow-up complaint about the account. Note that Twitter will not proactively monitor the account, but will respond to all valid follow-up complaints.

For the remaining reported account accounts:
Tweets by _C_NyaKundiH
Tweets by NyakundiH_C
Tweets by C_Nyakundi_

we’ve removed for a violation of Twitter Rules (https://twitter.com/rules), and specifically our rules regarding impersonation on Twitter (https://support.twitter.com/articles/18366-impersonation-policy). 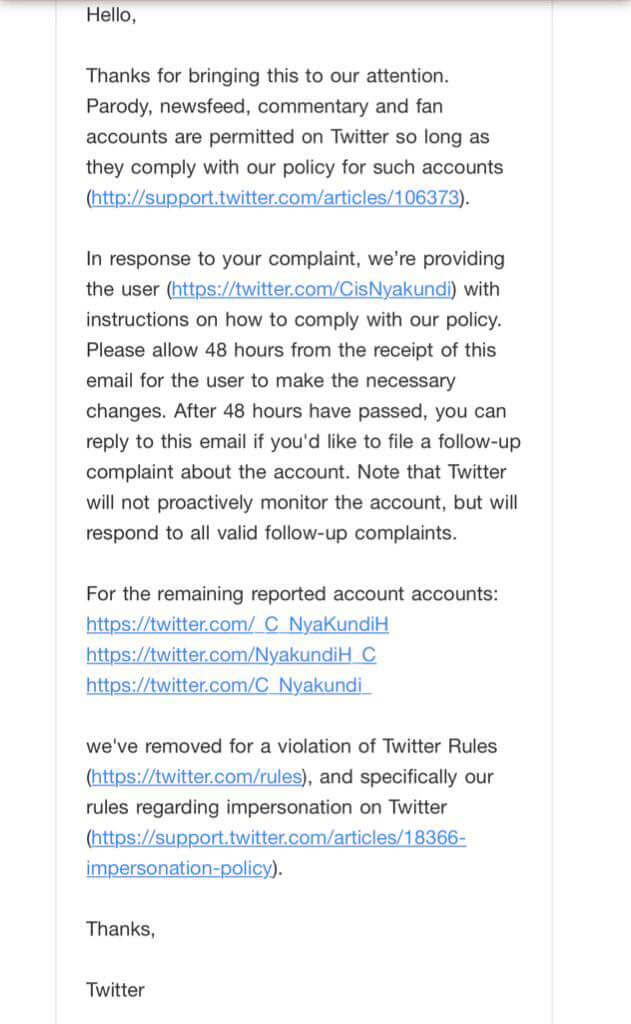 Indeed Twitter has suspended some impersonators but left others out. It is interesting how Twitter doesn’t keep a profile of popular accounts they suspend and protect them from impersonation. I again wrote to them complaining about more accounts impersonating me

Thanks. I have checked the account (https://twitter.com/CisNyakundi) and he has indeed amended and indicated it is a parody but sadly, there are more accounts impersonating me.

How come you didn’t detect these ones?

Twitter must do something to protect popular figures that they suspend. Should it be our work to monitor and report accounts impersonating us

The only surest way to stop such impersonation is allowing the real personalities to tweet.

Thanks for bringing this to our attention. We’ve removed the reported accounts for a violation of Twitter Rules (https://twitter.com/rules), and specifically our rules regarding impersonation on Twitter (https://support.twitter.com/articles/18366-impersonation-policy).

If you wish to report other profiles on Twitter that you believe are violating our trademark or impersonation policy, you must submit a new report.

If the issue regards you or your brand, please file an impersonation report here: https://support.twitter.com/forms/impersonation. 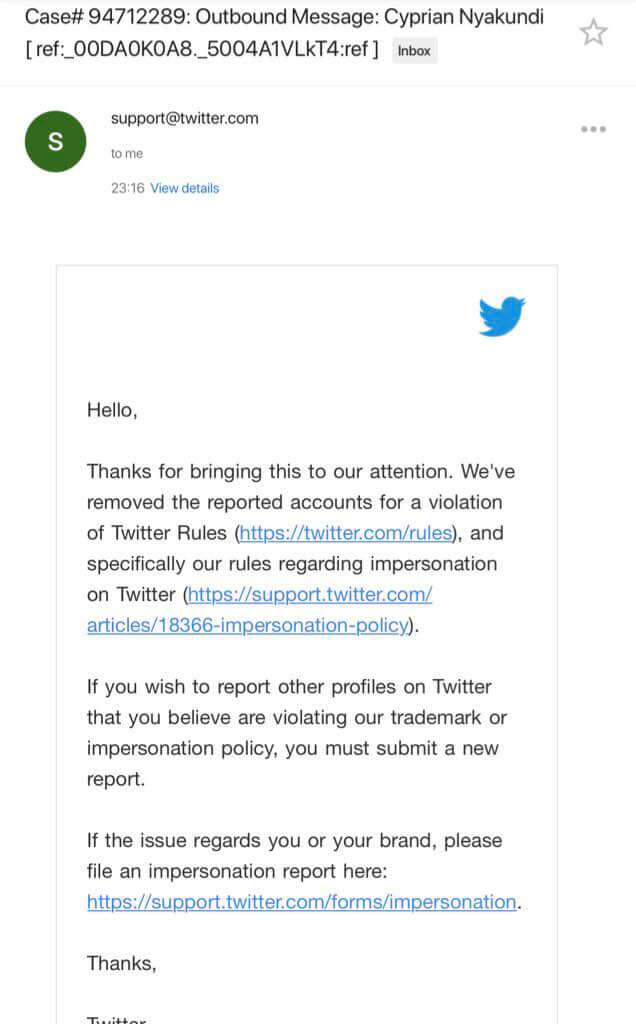 From all this, it comes out clearly that Twitter does little or nothing to protect popular figures they suspend from impersonation. A Basic Twitter search reveals that there are more accounts impersonating me but the Twitter algorithms are too fake to detect and suspend them. Isnt it interesting that Twitter can permanetly ban individuals but allow parodies under their name? Hmmm

Accounts with similar usernames or that are similar in appearance (e.g. the same avatar image) are not automatically in violation of the impersonation policy. In order to be impersonation, the account must also portray another person in a misleading or deceptive manner. 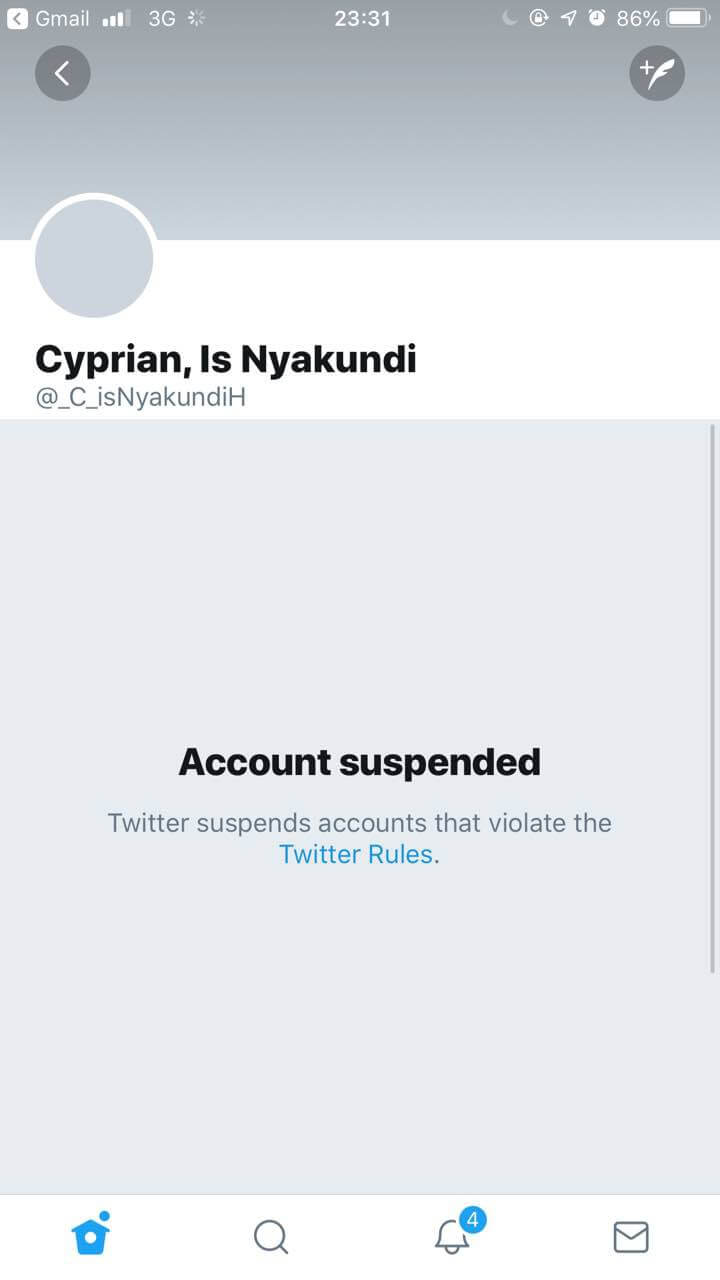 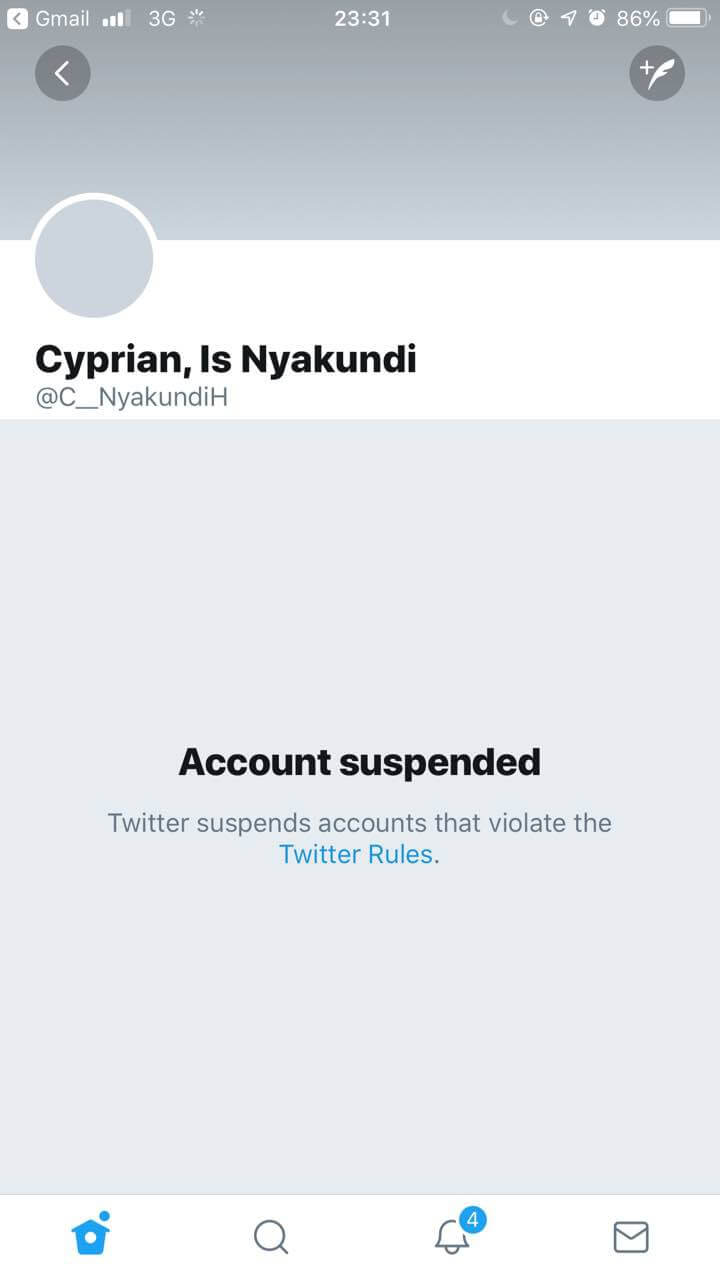 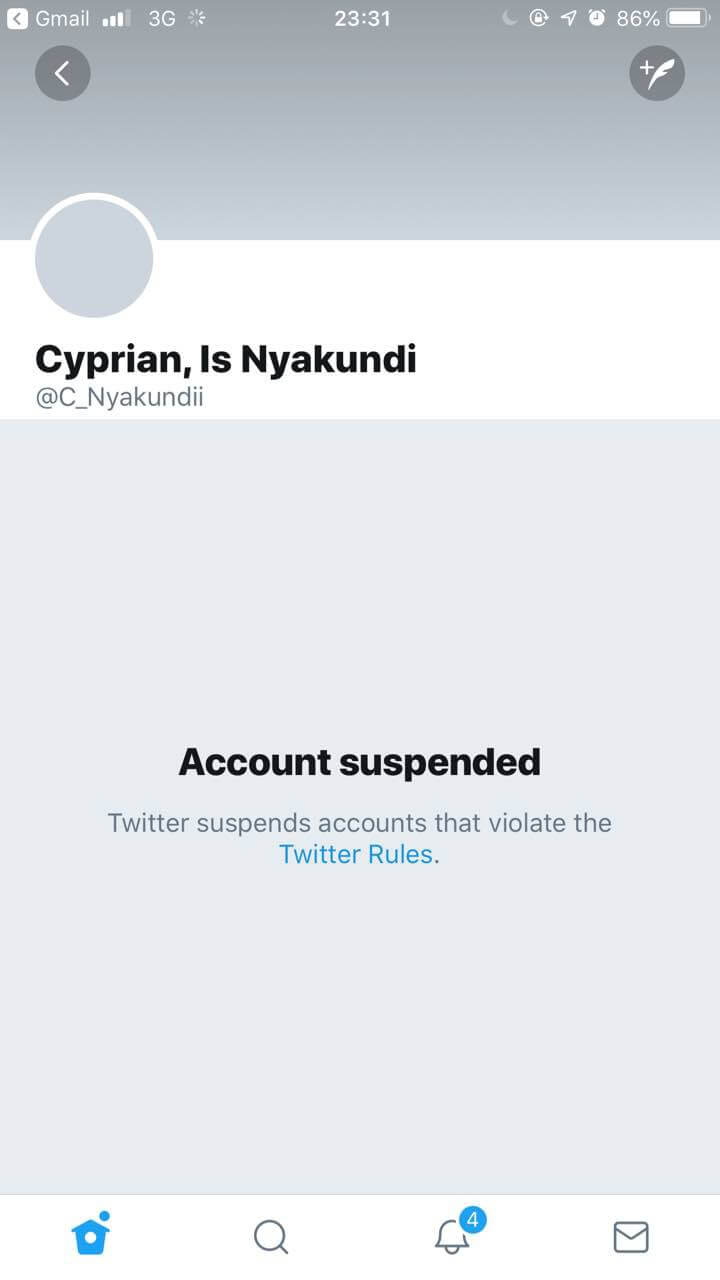 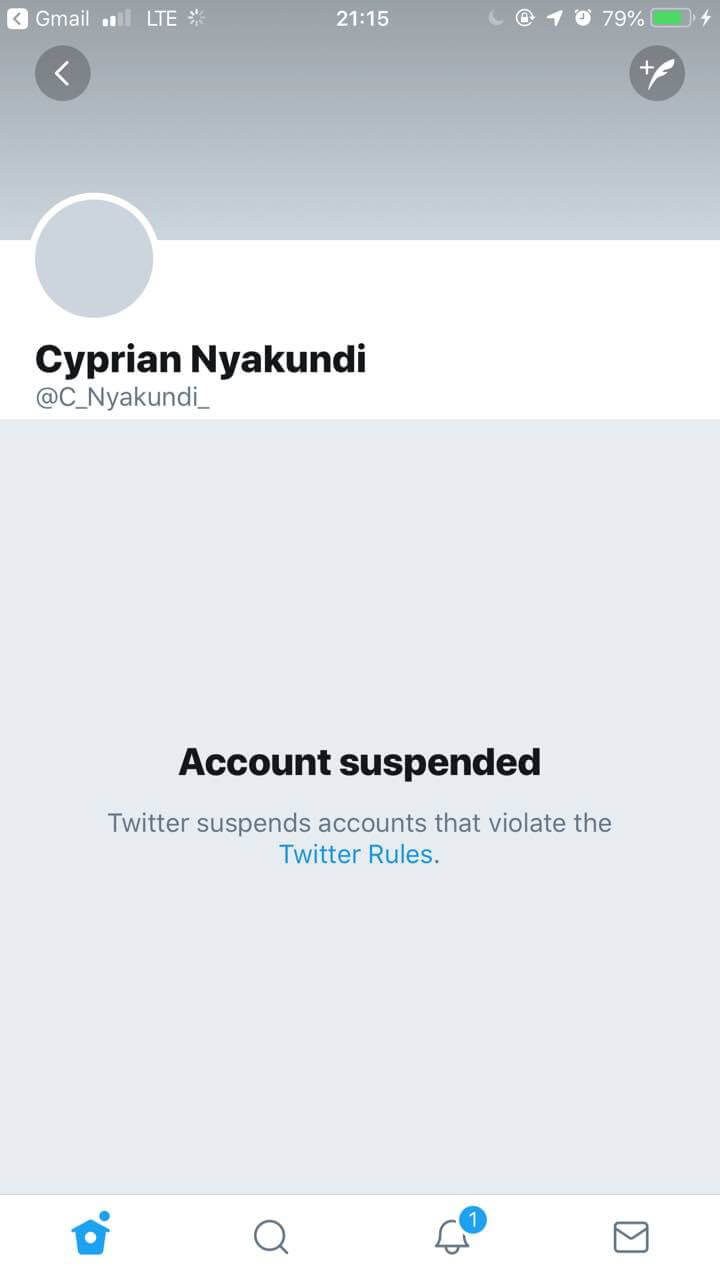 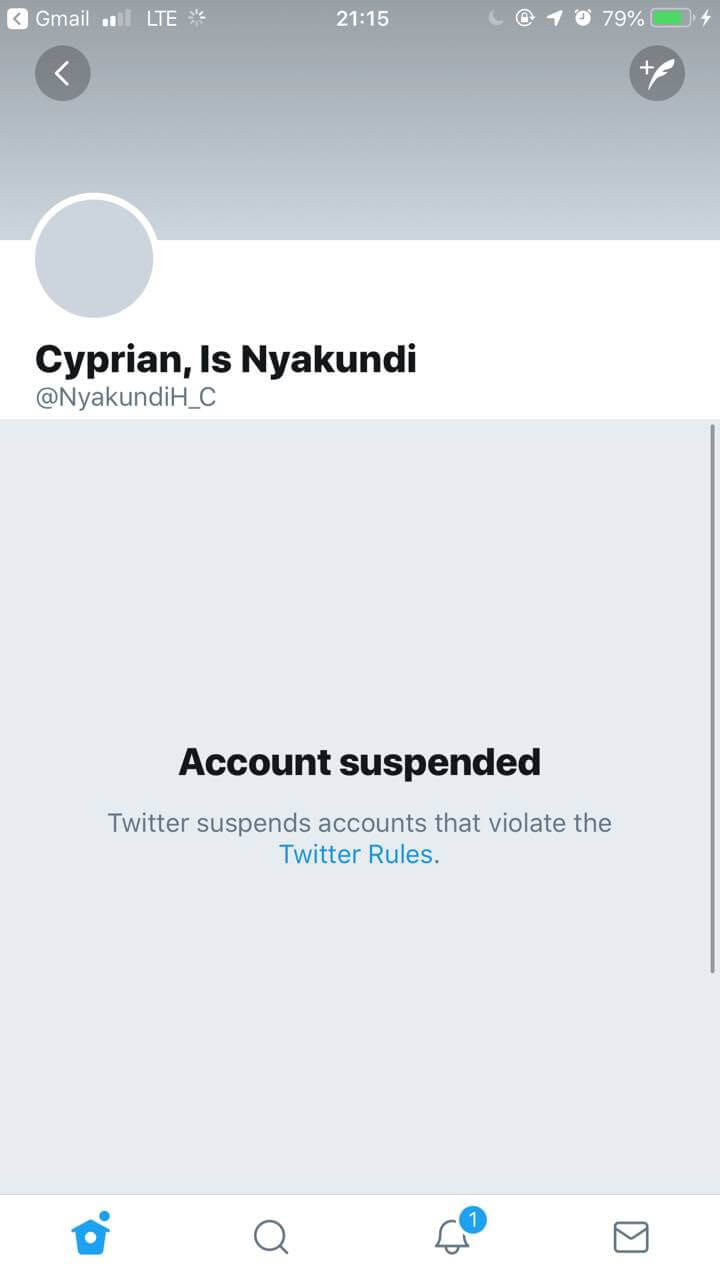 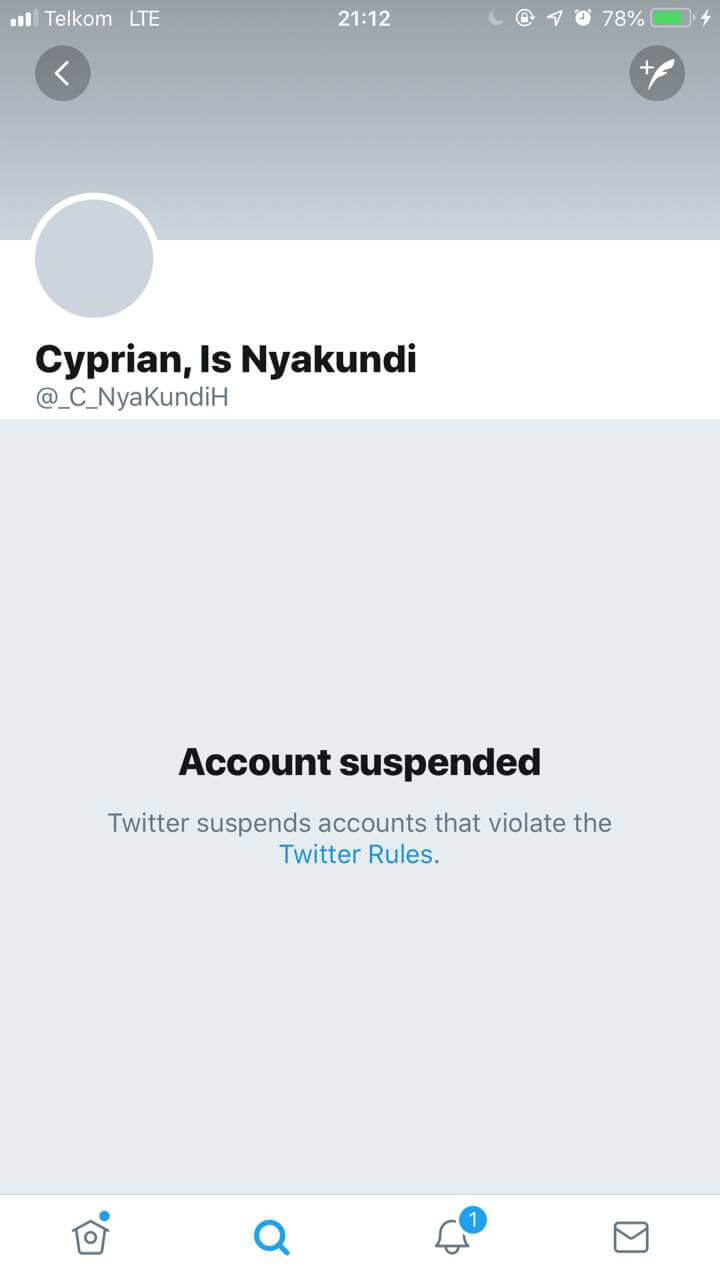