Kanu women congress leader Damaris Too has ditched Baringo Senator Gideon Moi and his KANU party with word that she is destined to join the Deputy President Dr. William Ruto.

The ‘queen of the independence party’ stated in her resignation letter that she was wants to pursue other personal and professional interests.

“Over my years as a gold member, I have had the opportunity to meet great leaders of the party and learnt many lessons that I will truly cherish in my future pursuits as I move to the next chapter of my life,” the letter reads in part.

Dp William Ruto is Senator Moi’s biggest political rival, not only in Rift Valley but in the entire scope of national politics.

Both leaders are eying the presidency when President Uhuru Kenyatta’s term expires in 2022 with Ruto being the man to beat. 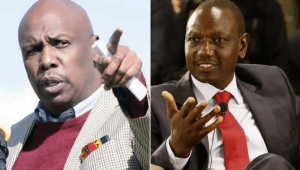 KANU that is just a shell of itself left is struggling to revamp itself as events to shape the 2022 battle takes shape with unveiling of BBI report in Kisii state lodge today.

BBI is going to set a fierce battle ground between DP William Ruto and ODM leader Raila Odinga who is aso scheming to succeed Uhuru in 2022.

Moi is also a BBI drummer with political undertones debating about him being Odinga’s running mate in 2022.

Ruto is a fierce critic of BBI which he terms as a ploy to create positions for a few dynasty sycophants instead of creating employment for the youth.

Moi is not commanding enough political influence to face Ruto, one of the reasons Damaris Too is shifting her political allegiance to where the future seems ‘bright’.

She also requested the registrar of political parties, to delete her name from the list of KANU members immediately.

The move to have the Registrar of Political Parties remove her name from members of Kanu is aimed at laying grounds for her to join Tangatanga or another party as a member and run for a political seat come 2022.

“By a foot of this letter request that the office of the Registrar of Political Parties to immediately delete my name from the members’ list of Kanu Party” she wrote.

Too also appreciated the old party for according her the opportunity to be part of ‘Kenya’s political history.

In this article:Damaris Too, DP William Ruto, Gideon Moi, KANU