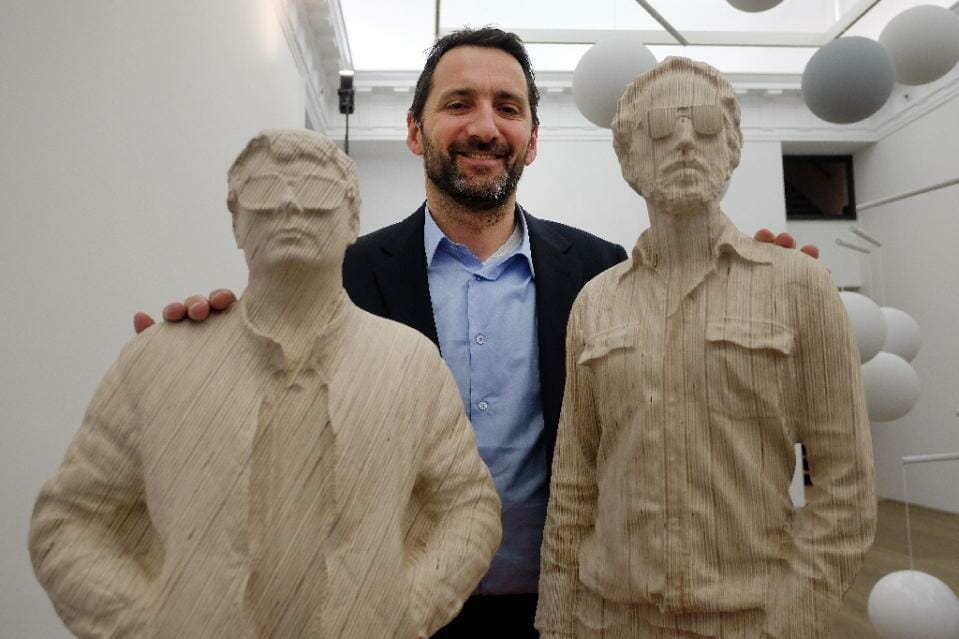 (AFP) – When sculptor Xavier Veilhan persuaded Daft Punk to come to his studio, the artist, in the words of one of the duo’s songs, got lucky. The ever-masked electronic musicians took off their helmets.

The result is a sculpture that shows Daft Punk standing casually and gazing into the distance, their faces now obstructed only by sunglasses. Bandmates Guy-Manuel de Homem-Christo and Thomas Bangalter are seen with hands slipped into their pockets in just-smaller-than-life figures made of wavy-toned birch plywood.

The sculpture, part of an exhibition by Veilhan on music producers that opened Thursday night at the Galerie Perrotin in New York, marks the first time that Daft Punk have intentionally been depicted without their trademark helmets.

“They proposed to make a sculpture that would be like the photographs of them that don’t exist,” Veilhan told AFP.

“The sculpture is almost turning into a situation like in the Middle Ages, when you have people only existing in a painting or a sculpture. I was pretty interested in this — it was kind of new, but also related to history,” he said.

Daft Punk, key figures in the French house music scene that exploded internationally in the late 1990s, have also rarely given interviews — a different approach in an era when most stars are expected to connect with fans at every available opportunity through social media.

Even when Daft Punk last year dominated the Grammy Awards with the album “Random Access Memories,” Bangalter and de Homem-Christo stood robotically in their helmets at the music industry’s gala in Los Angeles.

“I actually like it very much, because they control their own image,” Veilhan said.