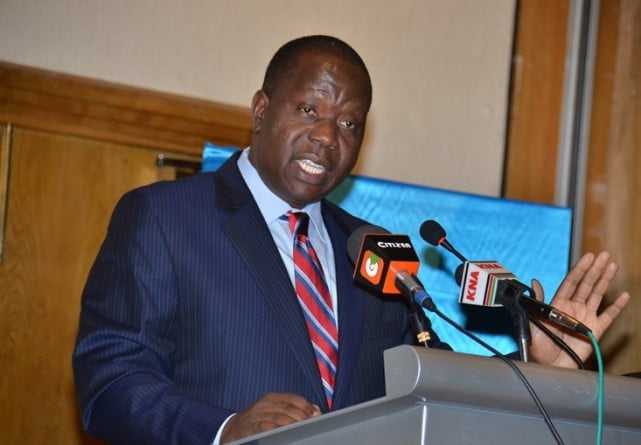 Interior Affairs Cabinet Secretary Fred Matiang’i is facing a lot of scrutiny from his community over what they perceive as failure to protect senior public officials from their region. Sources say that Dr. Matiang’i has struggled to explain why he couldn’t intervene in what they term as “politically motivated investigations prosecution, or outright ejection” of the people from his tribe from senior government positions.

In a sinister trend, majority of the members who are getting the axe are officials who either heavily contributed to the Jubilee campaign kitty or were used as scapegoats during rallies in the Kisii region during the campaign season as a bait to woo the community to vote for Uhuruto’s re-election.

Now, Dr.Matiangi and Solicitor General Ken Ogeto are being hang to dry by being held responsible for the ouster of these 10 members of the Gusii Community:-

Charles Ongwae:  He was the Kenya Bureau of Standards (KEBS) before being shown the door by DCI boss George Kinoti. The former banker was charged with attempted crimes against humanity over allegations of allowing the importation of contaminated sugar and fertiliser. Almost two years later, the prosecution has never commenced the charges.

Arc. Daniel Manduku: The Kenya Ports Authority boss who was forced to resign after a manhunt was initiated against him and a board meeting called to fire him over allegations of corruption.

Dr Evans Atera: Forced out after acting as MD for three years at the Kisumu based Lake Basin Development Authority (LBDA). despite assurances by the CS during campaigns and the board members ranking him best for the position with 80.67 per cent, he was sent home.

Josiah Moriasi: Recently reinstated temporarily to the Youth Enterprise Development Fund, Josiah is next in the list after CS Joe Mucheru attempted to kick him out.

Dorcas Kemunto-Wainaina: Sacked CEO of the Institute of Human Resource Development despite her exemplary performance. Dorcas has since moved to court to contest her dismissal.

Jemimah Onsare:  is under pressure by her board to exit as CEO of National Research Fund while Eng Pavel Oimeke of Energy and Petroleum Regulatory Authority is also fighting after a sponsored petitioner Dindi Oscar Okumu moved to the high court seeking orders to eject him of office over alleged integrity issues.

George Nyamoko Okong’o: The Kenya Maritime Authority (KMA) boss is a wanted man. The board of directors want him out in what sources say is a scheme orchestrated by his predecessor and now at the state department of Maritime and Shipping PS Nancy Karigithu.

John Omenge: The Former Petroleum PS was dropped during the last reshuffle after serving for just about one year.

Yabesh Oyaro: The former head of procurement at KPA whose name featured prominently during the Jubilee campaigns in Kisii was also demoted and dispatched to Kisumu where he serves without a portfolio.