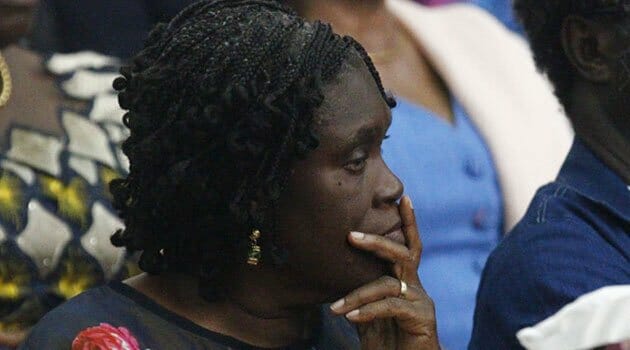 Ivory Coast’s former first lady Simone Gbagbo was due to appear in court on Monday to answer to a charge of undermining state security in a high-profile trial that led to scuffles outside the courtroom.
Police moved in to separate opponents of Gbagbo who yelled “Murderers!”, referring to post-electoral bloodshed in 2010-11 that led to charges against her and 82 fellow defendants, from her supporters, who shouted back “Liars”.

The wife of former president Laurent Gbagbo, who faces trial in July for crimes against humanity at the International Criminal Court in The Hague, is accused along with other figures in his regime of roles in violence that broke out in Abidjan when he refused to admit defeat in a presidential election in December 2010.

The defeated regime allegedly used brutal militias to attack supporters of the declared winner of the poll, Alassane Ouattara, but some of his backers are equally accused of atrocities, at a total cost of more than 3,000 lives.

The Gbagbos were arrested in April 2011, with Simone taken into custody in the north of the west African country while her husband was eventually turned over to the ICC.

The Ivorian judiciary has adamantly ignored calls for Simone Gbagbo to be transferred to The Hague as well, insisting that the onetime “Iron Lady” and other key players should be tried in their homeland.

Gbagbo, 65, had still not made her appearance in court by early afternoon.

“We are here for justice to be done. We expect (Simone Gbagbo) to ask for forgiveness. We refuse to believe that she did nothing,” Fanta Soumahoro, a woman who described herself as the niece of a victim in her 40s, told AFP outside the court.

“Simone Gbagbo did nothing!” exclaimed a nearby man who called himself “Ble Goude Junior”, after the ex-leader of the extremist Young Patriot movement that long supported Gbagbo. “She was the first lady. She wasn’t a soldier. She shouldn’t be here.”

For almost a month, a succession of politicians, journalists and other Gbagbo supporters have been questioned before the court, including a former prime minister and seven other ex-ministers, but no witnesses were called to challenge their testimony.

When journalists were accused of incitement to hatred, no press articles, broadcast recordings or video items were brought forward to back the prosecution’s claims.

Like the defendants, the political opposition and representatives of civil society have denounced bias and “victor’s justice” in the trial.

No one close to Ouattara has been investigated or prosecuted in connection with the violence that rocked the commercial capital for five months, yet his side is widely held to have committed atrocities.

“This trial should have taken place at the ICC,” where Charles Ble Goude also faces trial, said an elegantly dressed man in his 50s. “A racket at the Abidjan courthouse does not paint a good picture” of Ivory Coast, he said.