President Uhuru Kenyatta on Monday morning chaired the much-anticipated meeting of Jubilee MPs at KICC, Nairobi to unveil new changes widely seen to be a continuation of the purge on rebels who are invariably allied to his Deputy William Ruto.

In the meeting that lasted roughly half an hour, Garissa Township MP Aden Duale was ousted as Majority Leader in the National Assembly and replaced by Kipipiri MP Amos Kimunya.

Eldas MP Adan Keynan was also designated to take over as the Secretary to the Jubilee Coalition Parliamentary Group, a position previously occupied by Kimunya.

Keynan’s instalment as Kimunya’s replacement was seen in some quarters as a move to appease pastoralist communities from Northern Kenya following Duale’s removal.

President Uhuru Kenyatta attended the meeting in person despite initial reports that he would address the lawmakers via video link from State House, Nairobi.

Deputy President William Ruto was also present at the gathering despite his allies in the Senate and National Assembly being the main targets in the relentless purge.

Only 3 people spoke during the meeting; The person who conducted the opening prayer, Secretary-General Raphael Tuju, who then invited the Party leader, Uhuru Kenyatta, to read out the effected changes and closed the meeting. 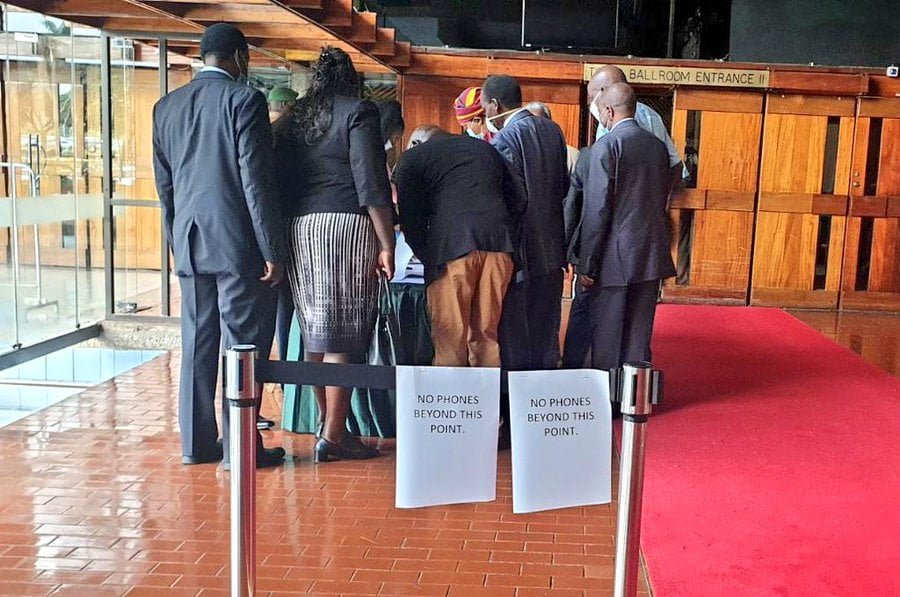 Lawmakers who attended quickly agreed to the proposed changes.

On Sunday, Jubilee Party Vice Chairman David Murathe warned members of dire consequences if they fail to attend the meeting, noting that “Missing the PG meeting should not come to anyone’s mind.”

It has also emerged that a push by Raila Odinga’s ODM to secure the leadership of two House committees met resistance from the ruling coalition.

Inside sources revealed that the President’s party had rejected ODM’s demands to head the committees of Justice and Legal Affairs as well as Delegated Legislation.

It is believed that Jubilee wants Kangema MP Muturi Kigano to head the Justice and Legal Affairs, while Kanu’s Tiaty MP William Kamket is tipped to chair the Delegated Legislation Committee.

In the event ODM succeeds to secure the Delegated Legislation, sources say Homa Bay Woman Rep Gladys Wanga or Ruaraka MP Tom Kajwang’ are both up for consideration.

Cherangany MP Joshua Kutuny is rumoured to head the Transport committee, which would mean current chairman David Pkosing (Pokot South MP) could be moved to another committee.

During today’s meeting, Uhuru was expected to address the controversial opening of a parallel office, the Jubilee Asili Centre, by Ruto and his allies but he didn’t.

Last week, Ruto hosted all the de-whipped MPs for lunch at the Jubilee Asili Centre, in what has sparked mixed reactions in the party.

Analysts see the move as a scheme to organise himself ahead of the 2022 presidential election, having lost grip of the current party which gave them power.