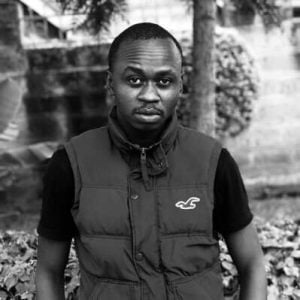 The video features a conversation between Nairobi Governor Mike Sonko and his Kiambu counterpart Ferdinand Waititu. The controversial phone recording has been circulating on social media for the better part of the day.

In the recording, Waititu is heard begging Sonko to free his wife Susan Wangare and 14 others that had been arrested today morning in connection with illegal and unapproved construction of buildings in Nairobi. Sonko promised to ‘break the law’ and order for the release of the wife alone.

It seems like the Mike Sonko media team reported the video after the PR antics he tried to spin failed to bear fruits. Many Kenyans have criticized Sonko for being childish and recording his colleagues to score cheap points. 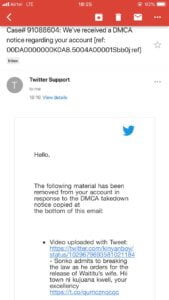 Caption: Twitter notifies Dennis Owino that they have pulled down his tweet following a DMCA complaint from Nairobi Governor Mike Sonko.

Governor Waititu’s wife Susan Wangare was later released on a cash bail of Sh80,000 after she was accused of putting up illegal structures without the Nairobi county approval forms.

Twitter has been receiving harsh criticism for trying to police what people post on their platform . Many Kenyans including blogger Cyprian Nyakundi, the Chief Editor of this site, have been suspended in what has been suspected to be a crackdown on government and private sector targets.

The taking down of Dennis Owino’s post has shocked social media users since it was Sonko who actually leaked the audio and Twitter should have at least considered that fact.

Popularly known as Kenya West, the blogger remains one of the top most ranked bloggers in Kenya on politics and governance sphere and the flagging by Twitter adds to the the fears that Twitter is working with the government to target its harsh critics and stifling free conversations online as the company looks into commercializing and making huge revenue from big corporates which are victims of harsh criticisms as well as the government.