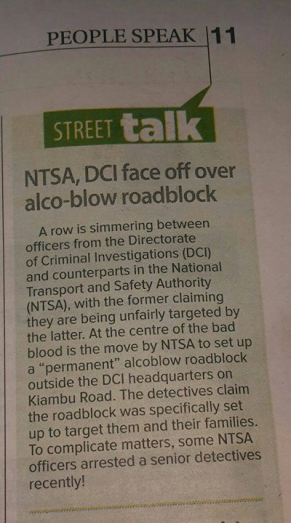 Coward President Uhuru Kenyatta has recalled his delusional project targeting motorists who drive under the influence of alcohol. The project that has recently come under fire as an extortion check-point, now faces an uncertain future as a row is simmering between National Transport & Safety Authority and the Directorate of Criminal Investigation.

It has always baffled Kenyans how President Uhuru Kenyatta, a known functional-alcoholic and chain smoker, would walk the moral high-ground and enforce a redundant directive, selectively targeting the middle-class who drive personal vehicles that don’t cause as many accidents as public vehicles.

The NTSA headed by Uhuru’s buddy Lee Kinyanjui conveniently overlooks public vehicles with serious flaws and targets the middle-class as a means to extort Kenyans, rumors are rife that over Kshs. 2 million is collected in a single day, in the form of bribes and fines. Jails that should be occupied by terrorists and criminals, are now being used by the Uhuru regime to harass civilised and peace-loving Kenyans.

At the centre of the recent row is murmurs that NTSA officials have arrested senior DCI officials including their families, at the roadblock mounted just outside the headquarters along Kiambu Road. Members of the National Intelligence Service (NIS) have also been victims when the roadblock was mounted at Ruaraka, a sad state of affairs considering that their intelligence gathering also details interacting with Kenyans at social-gatherings.

We also recently ran a piece of how Buffet Park/Tamasha in Hurlingham, an establishment that has been in existence since the Moi era, shut down after Alcoblow roadblocks were erected in the Kilimani area, a move meant to sabotage their operation giving space to Kiza Lounge owned by Nigerians linked to Statehouse. Indeed, many connected bar owners/operators are said to bribe senior NTSA officials to place the extortion check-points away from their vicinity.

On Friday night/Saturday morning, a massive crackdown on Museum Hill/KBC/Uhuru Highway saw close associates of President Kenyatta being nailed, which prompted Saturday night/Sunday morning’s absence of NTSA checkpoints. Users and fans of “Alcoblow Watch” didn’t record or post of any extortion checkpoint anywhere on the night of Saturday 12th March/morning of Sunday 13th, simply because Uhuru’s friends were arrested.

Ladies and gentlemen, shall Kenya continue to operate like this, at the discretion of Uhuru and his friends and sycophants? Would you as a Kenyan who was forced to part with Kshs. 30,000.00 out of your hard-earned savings, ever vote for President Uhuru Kenyatta again, even if he was your tribesmate? Why does it seem that Uhuru is targeting members of his tribe by mounting roadblocks and killing Kikuyu-owned businesses? Of what use is it to have a Kikuyu President if your community has had to endure pain and suffering of a dead economy and selective laws like Alcoblow, yet corrupt Governors, MPigs, etc roam freely?