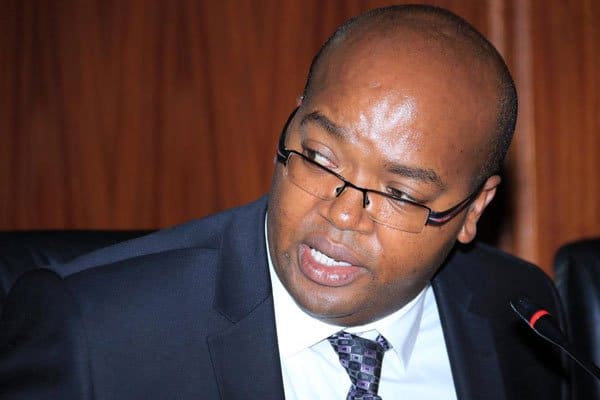 A report by the Senate Committee probing the scam says Muraguri, who is now the Lands PS, hid the contracts and other supporting documents on grounds that they were ‘secret’.

Under the controversial MES deal, the national government contracted five firms to supply specialised equipment under a leasing deal for the diagnosis and treatment of ailments such as cancer in 2015.

“The committee further observes that according to the testimony of Dr Mailu, he faced various challenges during his tenure as CS Health owing to a poor working relationship with his PS, Dr Nicholas Muraguri arising from disputes over their respective mandates, and alleged efforts by the PS to impede his work at the MoH,” the committee says in the report tabled last week. Amid the frosty relationship between the two, Mr Muraguri signed the letter on behalf of the Health ministry that awarded a local firm the contract to supply radiology kits in a deal that breached tender requirements.

GE East Africa, a local company that does not manufacture medical kits won a Sh24.06 billion contract to supply radiology kits to level 4, 5 and 6 hospitals in the counties.

Under the MES deal, only original equipment manufacturers were eligible to vie for the supply of specialised equipment to the 47 devolved units raising concerns on why the ministry went for an unqualified contractor.

The Senate committee did not recommend particular sanctions against the former Health PS, instead saying that any official involved in the flawed deal be charged in court and barred from holding public office.

Some shadowy figures who benefitted from the scheme have become overnight millionaires just like in the Covid-19 scandal.

Officials at the health ministry who are under the radar of the EACC and businessman Richard Ngatia who doubles as the president of the Kenya National Chamber of Commerce and Industry (KNCCI) have been mentioned in MES dealings.

When CS Kagwe took over at the Health docket, he sought to rid the ministry of people he referred to as ‘wakora’ by transferring them. The names reported were Morekwa Moranga, the Undersecretary MoH, Hezekiel Chepkwony, head of Quality Assurance Laboratory, his deputy Pius Wanjala, and Fridah Govedi who is the Director of the Kenya National Blood Transfusion Services.

Sources say that he was summoned by ‘cartels’ and after a dressing down, the cartels he had mentioned stayed put.

Mafya House, as it is infamously known, is a den of thieves and the corruption that goes on in there is mind boggling.

Richard Ngatia’s Megascope is said to have received a Sh1.1 billion contract for supply of equipment to fight Covid-19.