Election of a new deputy speaker will be on top of the agenda as Nairobi County Assembly resumes it’s sittings on Tuesday after a six week recess.

Ruai MCA John Kamangu who is the current holder of the position is expected to resign and will be replaced by the Baba Dogo MCA Geoffrey Majiwa.

This after ODM and Jubilee brokered a deal which saw them support Jubilee’s Benson Mutura who was elected speaker following the resignation of Beatrice Elachi in July.

Minority leader Michael Ogada said the biggest business of the assembly on Tuesday will be the election of the deputy speaker.

“We are supposed to elect a new deputy speaker and the position will be filled by an ODM’s Geoffrey Majiwa in the spirit of the Handshake,” Ogada said.

Majiwa had previously served as the Nairobi Mayor in 2010 but left the office over corruption allegations.

In 2010, Majiwa was arrested for defrauding the City Council of Nairobi of Sh283 million. 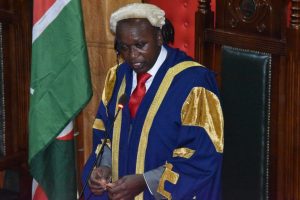 He acquired the money from the then Ministry of Local Government purporting it to be the purchase price payable by the City Council for cemetery land at Mavoko Municipality.

He conspired with other staffers at the City Hall, though they all denied the allegation, Majiwa failed to ascertain city council had received or accepted any offer from Mr Henry Kilonzi who was to sell the parcel of land.

Majiwa was acquitted of the charges in 2012 after which he made a weak attempt to run for Ruaraka parliamentary seat but he never made it and settled for Baba Dogo ward seat that he currently holds.

After installation of Majiwa, the speaker will decide the composition of the house business committee (HBC), the select committee and the committee on appointments.

Speaker Mutura who is a former Mp for Makadara will also constitute a new speaker’s panel after the previous team was disbanded by Elachi, early in the year.

The panel consists of MCAs who, in the absence of both the speaker and the deputy are mandated to lead plenary sessions.