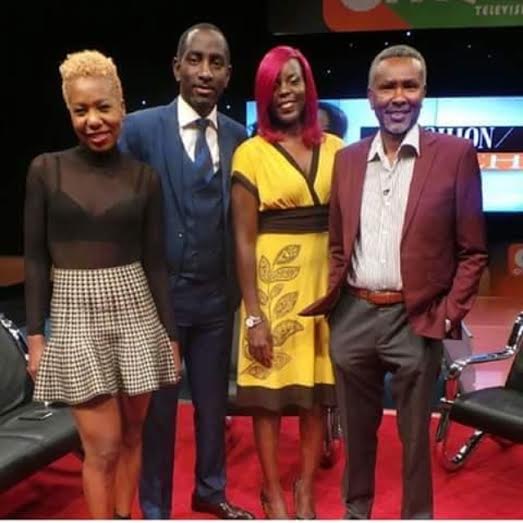 Do not adjust your gadget, this is not the cast of a horror movie but Kenya’s top fashionistas according to Citizen TV. From their looks, the colors, their entire presentation, you can tell that these are a bunch of impostors masquerading as Kenya’s lead fashion analysts. The question to ask yourself is, don’t we have genuine unknown fashion bloggers out there (not the repulsive character that owes her being to Chris Kirubi) or fashion designers that Citizen TV can elevate instead of this SkyWars looking cartel that only have fake-accents as their claim to fame?

But that’s only a tiny representation of how Nairobi operates these days. Shameless self-promoters have been allowed to run amok, choking the very space that real meritorious individuals thrive in. Little wonder how Tusker Project Fame ran for a total of six seasons, and no meaningful talent was discovered. From the auditioning to the final decision making process, cronysim took precedence over merit.

And it’s the same everywhere. From employment to promotions, to tenders, corporate Nairobi is all about who you know or how far apart you can spread your legs. The latest fad being sexual orientation. Apparently if you’re gay in Nairobi, your career will be guaranteed of a vertical elevation, as many directors of various blue-chip companies are said to live double lives, and are sexually conflicted hiding behind “happy” marriages but having parallel gay relationships. An operative working with a leading Ad-Agency and the father of Internet slander in Kenya and who goes by the Twitter name @MediaMK is one such sexually conflicted character, as he once in a while tweets about advances and innuendos from married men. A recent outburst and confrontation with media personality James Smart left him exposed.

In August last year, Britain’s 3rd largest recruiter Ernst and Young dropped degree classification threshold for graduate recruitment Saying that there was no evidence that success at university is linked to achievement in professional assessments. Many top firms have shifted their recruitment policies and are now scouting or head-hunting for exceptional talents in schools, congresses, online or even by referral.

When a young boy named Ahmed Mohammed from Irvin Texas was arrested by local police on suspicion of taking an explosive device to school, Americans were outraged after it turned out that it was a clock that the boy had assembled and was taking it to school to show his teachers. And with that, the boy was swamped with invitations to intern at some of the top institutions in America including NASA, Facebook, Twitter and even landed an invite to WhiteHouse from President Barack Obama.

But in Kenya, the scenario is different. Merit, intellect and exceptionalism are bullied by the masses who were conditioned by the 8-4-4 to soma vijana, utapata kazi nzuri sana. Reason why you see bloggers are treated with contempt simply because of their age. Because older Kenyans tweeting far much worse content are rarely ridiculed or even arrested by the authorities. Corporate head-honchos and so-called HR practitioners  sit in their offices waiting for desperate Kenyans to submit their applications using outdated criteria and cut-off standards, crippling productivity and ingenuity. Not surprising why 15 years after it was discovered and stolen from a Central Bank employee, MPESA is still the only revolutionary idea to come out of Kenya.

The Kenyan system was designed to put down co-curricular excellence and only elevate educational exploits because on those parameters one can grow at the rate and pace that the Government wants. Reason why sports and artistic disciplines were shunned by 8-4-4 schools and the reason why there is a current spike in lifestyle diseases because physical development was not a priority for Moi who thought he was going to rule Kenya forever. In his heydays, creatives faced immense hostility. Writers were branded as dissidents, journalists were under threat and even comedians like the Redykyulass Trio were often forced to cancel their performances that were deemed critical of the regime.

Back to the horrendously looking so-called fashionistas up there. The question is, why can’t Citizen TV diversify their pool of content providers, by elevating the real industry players? There’s women in Kibera designing serious African attire, or fashion analysts by the dozens on Instagram who can add a fresh twist into routine programming, bringing on board diversity and choice. Can’t people use their platforms to elevate without expecting immediate return? Can’t we have people just doing the right thing?