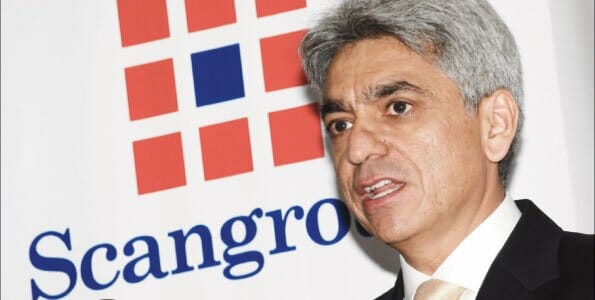 Caption: ScanGroup CEO Bharat Thakrar who has overseen his company delivering the most mediocre marketing concepts simply because he can get away with it.

Some corporate officials perhaps feeling the heat from the facts presented here, have responded to comments about the inherent mediocrity of adverts, by forwarding a list of grievances.

Brand managers who spoke on condition of anonymity lament that the companies which they work for, have reduced them to “flower girls” in the process of marketing their brands. The officials contend that most of these firms commit their budgets 100% to advertising agencies, leaving no room whatsoever for the creation of internal/organic advertising programs.

The current advertising agencies consist of retarded minds and sexually-promoted staffers, who are stuck with the old way of doing things. While in the US big brands have gone unconventional, Kenyan brands are still stuck in high-cost generic regimes.

A simple comparison of Ciroc Kenya’s campaign will reveal more. While in the US, owner of the brand P-Diddy has gone 100% using male Instagram content generators, Kenyan marketing agencies charged with the same campaign opted to go “sex appeal” with an expensive, unrelatable campaign.

Brand managers in various companies content that advertising agencies should only get 30% of the total budgets, leaving room for departments to create original concepts.

Yes, as we are pursuing political reforms, corporate governance also needs to be embraced so as to encourage diversity and breed new ideas. Currently, advertising agencies are stuck in the old way of doing things, and choking our spaces with mediocre but expensively-done adverts.

Many brand managers complain that their companies have reduced them to observers, who are called to meetings at say, ScanGroup, Ogilvy or Saracen, just to rubber-stamp mediocre concepts. Occasionally they’re asked to “help” with events.

Corporate governance needs reform as brand-managers want the room to create without being choked by the redundancy and bureaucracy of advertising agencies, who seem to have run out of ideas.

We have pointed out the fact that Huddah’s photo, taken randomly with a cell phone, next to a bottle of Bellaire Rosé was used by the champagne’s owner Rick Ross on his official Instagram page. We want to see if Ciroc Kenya’s super-expensive campaign will be endorsed by Diddy on his IG page. Although nobody is holding their breath.

Advertising is dynamic. Tying it down with bureaucracy and retarded agency-mentality just exhausts budgets and provides visibility with no legacy.

We have seen Ciroc’s activation from conception to-date. We have seen how Diddy has done it using Instagrammers like FatBoy and SaltBae. It’s all about male-empowerment. Why sex-appeal is KE advertiser’s only approach to advertising, only God knows.

Caption: Ciroc’s low-cost but high-impact campaign as done by brand owner Diddy in the States. Here in Kenya, we have high-cost but low impact adverts, because advertising agencies love to waste cash, as opposed to spending it to build individuals and people. Diddy is all about