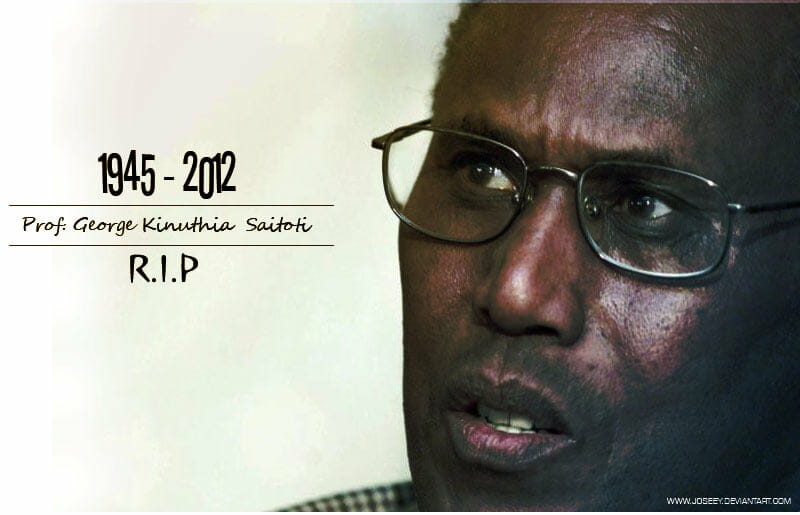 Cord leaders are now threatening to unleash a damning and an explosive dossier on what could have been the possible cause of the demise of former Internal Security minister, George Saitoti who perished in a horror chopper crash in Ngong on June 10 2011.

According to sources within the alliance, to counter Jubilee’s moves to fix top Cord luminaries by linking them to multiple scandals, Cord will seek to link Saitoti’s untimely departure to political shenanigans gone awry. The idea is to politicise the sudden death to Cord’s advantage as political enmity between the two protagonists reaches dangerous verge.

It is said if Saitoti had been around to participate in 2013 presidential race whetrher as candidate or running mate, the political map would likely have been different today. During his burial, Raila Odinga, then prime minister, claimed that he was working with the professor on a major political plan. Sources say that Raila was pushing Saitoti to run for the presidency to split the Mount Kenya vote.

Saitoti’s presidential bid is said to have divided the then President Mwai Kibaki kitchen cabinet with majority supporting his political ambitions. Saitoti had set up a well wheeled campaign secretariat in Nairobi’s Westlands area. When he died, talk was rife on the cause of his death with claims it was political assassination.

There were fireworks in parliament when then ODM nominated MP Rachel Shebesh, now Nairobi women representative, claimed she had information on the crash that, “could shut down this government” Shebesh dropped her bombshell after then Makadara MP Gideon Mbuvi Sonko now Nairobi senator told the House Saitoti and Ojode were killed because of their efforts to fight drug trafficking.

Sonko went on to give details of how former GSU officer, one Erastus Kitur Chemorei, who was in charge of the storage of the Sh6.4 billion cocaine haul seized by police in a private villa in Malindi, was felled “by 400 bullets” fired by his own colleagues.

He further tabled rulings of a magistrate court in Eldoret that among other things confirmed Chemorei was murdered by fellow cops. With Shebesh now in Jubilee, Cord reportedly will press her to tell what she knows.

It is this political assassination aspect that Cord wants to revive in its current war with Jubilee. Informed sources told your favourite CNYAKUNDI.COM  that the said dossier on Saitoti death is set to shake the political establishment and the entire country. The plot is to call an international press conference with all Cord leaders in attendance.

This comes in the wake of reports that a scheme to fix Raila, Kalonzo Musyoka, Moses Wetang’ula and other top Cord operatives has been hatched. It will involve exposing the skeletons in their cupboards for all to see and demolish once and for all their holier-than-thou mien.

State agencies are said to be working on a dossier on various Cord leaders that will be released one after the other. The plan could even see some Cord leaders arraigned in court over crimes allegedly committed over 10 years ago.

Sources say Cord is now plotting a decisive counterattack by hammering a theory on Kenyans that certain politicians had a hand in the death of Saitoti after it became apparent that he was determined to spill the beans and name key drug barons in government.

According to Cord, Saitoti’s candidacy through the Party of National Unity was a big threat to a section in then coalition government and fear was he was planning to enter into a pre or post-election agreement with Raila. The arrangement was based on the fact that Saitoti was to support Raila in case of a run-off.

Some leaders were said to be  bitter with Saitoti after he refused to surrender the party’s leadership and his supposed plans to team up with Raila did not go down well with them. It was even said that Saitoti had offered to be Raila’s running mate in 2013 elections.

To re-open the matter afresh, Cord is said to be building a case based on a theory that Saitoti could have been targeted. Dr Dorothy Njeru and Dr Amritpal Kalsi, government forensic pathologists who handled the body told the probe team that Saitoti’s body indicated significant levels of carbon monoxide poisoning.

However, according to a report by a commission of inquiry into the air crash led by Judge Kalpana Rawal, the aircraft was overloaded by 11 kilogrammes, which hampered control. Cord, it is said, will question why the flight was allowed to take off when it was overloaded, then.

Cord also will also reportedly want satisfactory explanation on earlier claims that the National Intelligence Service interfered with forensic findings. This was revealed during the commission’s hearing where a witness, Kalsi alleged that her boss said the NIS instructed that forensic findings be kept secret.