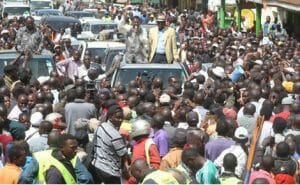 CORD has learnt from its past mistakes . Sources have confirmed to me that they have accepted that they made a blunder in the last general elections and have sworn to seal all the loopholes come 2017. CORD has come up with a strategy on how to win in the 2017 elections . The plan involves embarking on a massive ID registration campaign in all CORD strongholds. This strategy is expected to counter the popular tyranny of numbers.

Voters in the CORD strongholds will also be mobilized for Vote enlisting. Raila believes that the last presidential race could have resulted into a run-off had registered voters in CORD strongholds turned out in large numbers to cast out Votes.

Popular political Scientist Mutahi Ngunyi once said that CORD lost because of poor voter registration and voter turn-out in their strongholds. This strategy has caught Uhuru’s political schemers pants down- According to our sources.