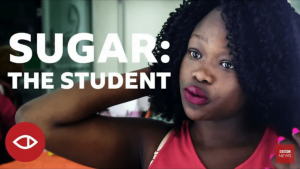 A recent BBC Africa documentary named “Sugar” has sparked a huge debate online as Kenyans poured down their reactions after watching the risks young Kenyan girls are willing to take just to become famous and rich.

The three girls in the documentary talk about the controversial “sponsor” topic and what pushed them into the path of older men and speak proudly of their decisions.

One of them is Bridget Achieng, a popular Kenyan model, socialite and a reality TV star on Nairobi Diaries. Bridget gives her story on how she always dreamt of a glamorous lifestyle and that sex appeal, rich tycoons and Social Media were all the tools she needed to achieve her dreams.

The other lady is Grace. A 24 year old single mother and nightclub dancer. She says that her desire to “be famous and have a good life” made her choose this path.

Jane, a 20 year old university student is another one of them. She says that young campus girls prefer dating older men to school kids nowadays. She openly boasts that she gets support from two older guys and asks, “What’s wrong with sex anyway?”

This documentary might leave you wondering what happened to genuine relationships where people looked for someone to help them fulfill their dreams and why it’s almost all about the money nowadays.

This is an eye opener on how a huge number of young girls in the country have turned overly materialistic and how societal values are slowly diminishing. Glory hunting has become the norm and it looks like the days of starting small and eventually rising to the top are long gone.

Many Social Media users have questioned BBC Africa’s decision to air this documentary and feel that in doing so, they are giving these girls a platform to influence many other young Kenyan girls into this new wave of dating older men.

Although many Kenyans expressed their displeasure, others felt these girls were on a genuine hustle and making clean money and that whatever they did with their bodies was their own business.

To be honest I see nothing wrong,lots of girls are hiding it. So I salute you as long as you not doing it for fame but to support you family

Others have expressed a feeling of pity for these young girls and feel they are unaware of the value they have and insisted there are better ways of making money.

Sad girl! She thinks this attention and sex is going to save her. The worse is saying that she wants others to walk the same path. You mean, trapped!?! Bound? It really isn’t freedom, and you pay a price when you choose this.