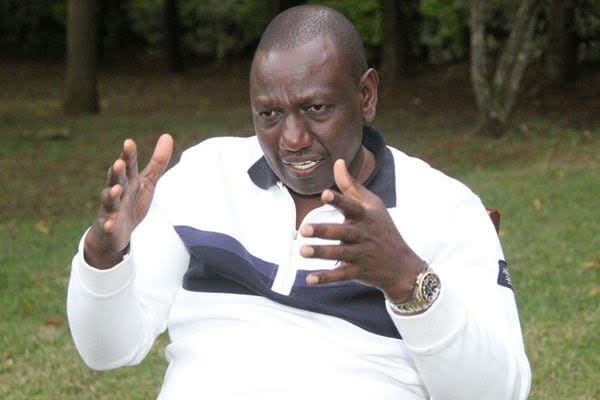 Photo Caption: “This is how we will steal football money” is what Deputy President William Ruto seems to be saying. Ruto has been connected with a football scandal involving Pewin Motors and Cabs.

Present at that meeting were Sports Cabinet Secretary Hassan Wario, Cabinet Secretary Phyllis Kandie, former Sports PS Kenneth Omutia, Sports Kenya CEO Gabriel Komora, Wilberforce Chebet, head of the tender committee at Sports Kenya, Peter Kirigua owner of Pewin Motors and Cabs and Kenneth Mathiu the conman who has already been paid Kshs. 70 million by Sports Kenya to secure commitment with Arsenal, but he shared the money with DP Ruto and other officials.

Not so innocent also is ODM’s Ababu Namwamba who together with former PS James Waweru, initiated this project and introduced these conmen to the public during a highly publicized press-conference at Safaricom Stadium, Kasarani. But Deputy President William Ruto has since taken charge, and all the money is being sent to him.

It’s the money he uses to donate to perennially-broke clubs AFC Leopards and Gor Mahia, and the players celebrate and rejoice like idiots, forgetting that it’s just 1% of their taxes that has been embezzled.
At the meeting, DP William Ruto’s taxpayer-funded chef’s prepared traditional Kalenjin food, plus the ceremonial ‘Mursik’ fermented milk. A feast for kings.

The meeting’s agenda was very clear. It had already been established that OpenSide Sports has no capacity to secure any team, so this was a heist that was being orchestrated. Daylight robbery of money meant to boost the youth. A group of old men who only want their children to benefit and attend the best schools, as the rest rots while drinking second-generation alcohol.

But sometime in June, Peter Kirigua had hosted Deputy President William Ruto for a fundraiser at Kathigiri Boarding School, one of the best performing public schools in the Meru region, where Kirigua is the chairman of the board of Governors (BOG). Kirigua flew there using the Kenya Forest Service helicopter, and Ruto arrive in similar means, after attending a function in Thika, where he has been accused of being unusually close to the area Member of Parliament Alice Nganga. But that’s a story for another day.

Back home in Meru, Kirigua is well known for his philanthropic acts, especially towards that school. Infact, a dormitory is named after him, and the vast majority of the Meru people who have read about this Sports Scandal are dismayed that he is stealing money meant to create opportunities for the youth, and diverting them to useless harambees.

So before we resume back to serializing this heist, overseen by none other that the second most powerful person in the country, the dots between Ruto and Kirigua had to be connected.

As of yesterday, Peter Kirigua is said to have received a telephone call from one of William Ruto’s aides, asking him not to panic, or attempt to withdraw his bid, because the DP had already discussed with the tender committee Chairman Wilberforce Chebet, who hails from the the same region, and the deal was more or less done.