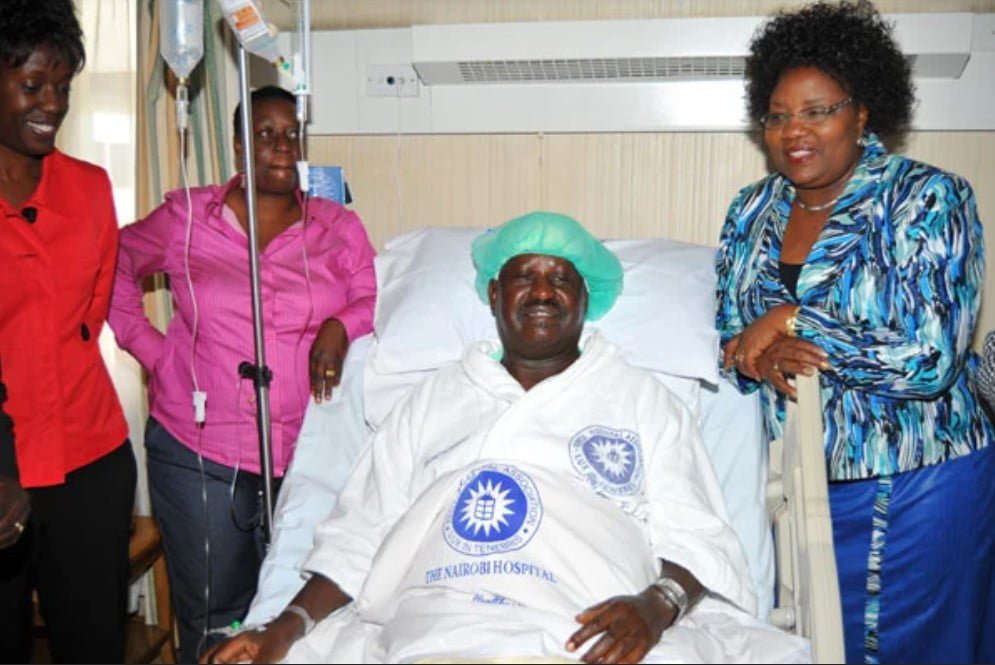 FILE Photo: Prime Minister Raila Odinga with his wife Ida (left), daughter Rosemary (right) and his sister Ruth Adhiambo at Nairobi Hospital in 2010: An excerpt from Thursday’s Daily Nation has confirmed rumours that the ODM Leader flew out of the country for surgery

Last week, numerous social media users shared a claim that former Prime Minister and opposition chief Raila Odinga had been flown to China for treatment of a kind of cancer “associated with old people”

According to the claim, Raila was accompanied by his daughter Winnie Odinga and an unidentified male aide to China.

Many others also circulated a letter which appeared to have been signed by ODM Secretary General Edward Sifuna and alleged to give clarification on the claim.

ODM Director of Communication Philip Etale, however, later dismissed the claim as fake news, saying it was the work of “sick people who have run out of ideas.”

Etale said Raila was in Kinshasa, DRC, in his capacity as the AU High Representative for Infrastructure Development in Africa for the virtual Pan African Conference on the Grand Inga Dam.

Raila also posted on the same but many questioned why he had to travel Kinshasa, over 3,655.7 km away, for a virtual conference.

Vindicating their intuition, Kenya’s largest publisher the Daily Nation has confirmed that indeed the self-proclaimed People’s President flew out abroad for treatment.

His destination, however, was not China as was previously widely reported, but Dubai where the paper’s Thursday frontpage reports he went for an unspecified “minor operation on the back” which the family spokesperson Oburu Odinga confirmed.

Here is a sneak peak of the yet to be circulated newspaper below as shared by renowned lawyer Ahmednasir Abdullahi on his official Twitter account,

This will hopefully bring an end to the growing speculations that have refused to die down over the last few days.

cnyakundi.com shall give a subsequent update on this story in the coming hours, be sure to check back.