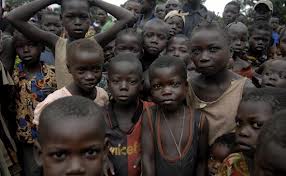 Thousands of Central African Republic (CAR) refugees are threatened by malnutrition in northeastern Democratic Republic of Congo where they have sought refuge, a medical charity said Thursday.

CAR is struggling to recover from the coup that ousted president Francois Bozize in March 2013 and triggered a wave of deadly sectarian violence between the country’s Christian and Muslim populations.

The surging violence has forced tens of thousands to flee their homes in recent weeks to escape killings, rape and pillaging by militias.

“The majority of the refugees depend largely on the generosity of the local population,” which is itself poverty stricken, Doctors Without Borders (MSF) said in a statement.

“Access to food and drinking water is limited for everyone. These precarious living conditions bring problems of malnutrition and water-borne diseases,” it added.

In one week MSF hospitalised 10 children suffering from acute malnutrition.

“Sometimes I work for a day for the local people and in exchange receive cassava leaves to feed my family,” the NGO quoted 73 year old refugee Anne Kabo as saying. She and her family have taken refugee in DR Congo since last May.

“We eat what we can, but we eat mainly cassava leaves. Sometimes we go two days without eating,” she added.

Since the beginning of the year, some 30,000 people have left their homes and found refuge within CAR, while more than 20,000 others have flooded into neighbouring Democratic Republic of Congo since December, the UN refugee agency UNHCR said Tuesday.

Largely Christian “anti balaka” — or anti-machete — militias have been formed to avenge atrocities by the mostly Muslim Seleka rebels who were behind the March 2013 coup.

Both sides are accused by human rights monitors of serious abuses, including killings, rape and pillaging.

Recent military operations against ex-Seleka in the eastern mining town of Bria has also prompted deadly reprisal attacks by the guerillas on nearby villages.

More than 19,000 refugees have flooded across the border to DR Congo from CAR’s Kouango district since December, UNHCR said.