The Co-operative Bank of Kenya (Co-op) has offered an initial Sh1 billion to acquire a 90% stake in Jamii Bora Bank , small lender disclosed ahead of its July 1 shareholders meeting.

The deal will see all Jamii Bora’s shareholders squeezed into a 10% stake but Co-op Bank’s will still give it the right to appoint the lender’s board and management.

This is different from the initial plan in March where the parties announced that Co-op Bank would purchase 100% in Jamii Bora. In the new agreement, the existing shareholders will not take out any cash.

The investors, including former Jamii Bora’s chief executive Sam Kimani and his successor Tim Kabiru and private equity firm Catalyst Principal Partners, were scheming to make Sh1.4 billion when they tried to sell the bank to former CBA Group in January of 2019.

In the  transaction to acquire Jamii Bora Bank, Co-op will be issued with 224.1 million new “Class A” shares which are equivalent to nine times the volume of stock held by the current shareholders.

“That in accordance with sections 399 and 400 of the Companies Act, the existing issued 24.9 million ordinary shares of Sh66 each be and are hereby redesignated and reclassified as Class B ordinary shares, such shares retaining their existing rights.” reads part of the statement. 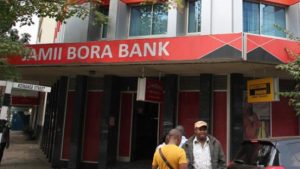 On July 1, Jamii Bora shareholders will vote on the CoopBank offer of Sh1 billion to allow them inject more cash.

Despite the difference in classes of stock, Jamii Bora says all the shareholders will have equal rightsof but the deal terms point a major loss  for the current investors.

Their combined ownership will have a nominal value of Sh111 million when the construction is done which is a 93% drop from the current Sh1.6 billion.

The transaction aims at rescuing the bank other than making profit because a the lender was making losses and it’s capital was eroding.

“The Co-operative Bank shall be entitled to … the right to appoint all the board of directors of the company in order to drive the needed transformation agenda, and in the event that the company is liquidated or wound up and assets are distributed to the shareholders –to 90 % of such assets,” said Jamii Bora.

Jamii Bora has not published its financial results for over two years after it received an exemption from the Central Bank of Kenya (CBK) to facilitate its buyout.

The lenders last disclosures were a Sh51.2 million net loss and net assets of Sh3.4 billion in the first quarter of 2018.

Its liquidity ratio was -11.1% compared to CBK”s minimum requirement of 20% when the last disclosures were made.

The deal with Co-op was arrived at to save the lender from a deteroriated financial health with problems tracing back to a Sh412 million loan to Kenya Airways and Shs 500 million to Uchumi.