The reporter, Sun Lin, who uses the pen name Jie Mu, was found guilty of “incitement to subvert state power” by the Nanjing Intermediate People’s Court following a trial in February. He was sentenced in absentia this week with only his lawyer in attendance (Sun, his attorney said, was being held in detention but was able to communicate with the jury via video link).

Sun’s lawyer said the sentence wasn’t a surprise given the fact that his client was tried as a re-offender. Sun had previously served a four-year sentence between 2007 and 2011 for “picking quarrels and stirring up trouble” after documenting alleged abuses of power in his local party government. The dissident, his lawyer said, has been financially dependent on relatives for years since he has been unable to find work due to his police record. 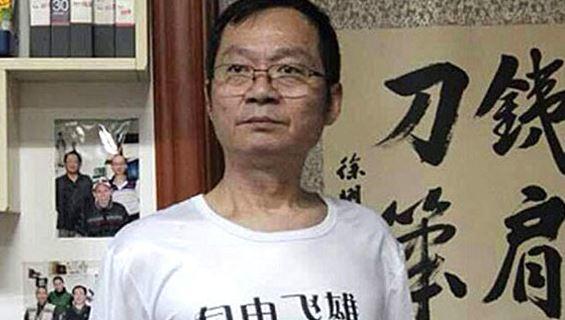 The case against Sun rested on 25 social media posts and videos that he shared on social media, as well as his decision to shout “down with the Communist Party” during an official party meeting in his neighbourhood.

“We don’t believe that this amounts to incitement to subversion,” Sun’s lawyer said.

The convicted journalist was initially jailed two years ago as he tried to film the opening of a trial of a Nanjing-based human rights activist named Wang Jian. Wang said he believes Sun is innocent.

“I think he’s innocent,” Wang said. “Detaining and sentencing him is outright political persecution, under international law and under the Chinese constitution.”

China has imprisoned more journalists and bloggers than any other country, with 60 behind bars currently in cases that human-rights groups claim amount to political persecution. Authorities often use charges of “picking quarrels and stirring up trouble” as a pretext to crack down on peaceful dissent.