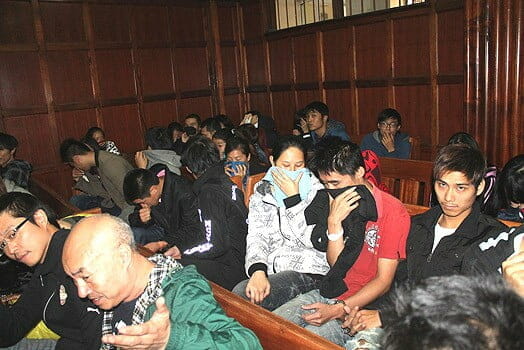 The Chinese government has formally asked Kenya to hand over 76 of its citizens who are facing cyber-crime charges in Nairobi.

The suspects arrested in Nairobi had stolen close to Sh1.5 billion from victims in China through electronic fraud, Chinese authorities revealed as they pushed Kenya to have them extradited.

The Chinese ambassador to Kenya, Mr Liu Xianfa wrote to the Foreign Affairs Ministry indicating that the suspects should be turned over because “the results of investigation indicate that all the victims (of the fraud) are in China.”

“The social impact of the crime is terribly serious and the Chinese government and public paid high attention to this case,” said Mr Liu in the letter dated January 13.

“At the request of the Chinese victims, the Chinese police has (sic) formally filed these cases.”

According to the police in Nairobi, the 76 Chinese and one Thai national were arrested in the upmarket Runda estate for operating an illegal telecommunications system.

One of the houses from which they had been operating was gutted in a fire during which one person, also Chinese, was reported to have died.

“Taking into account of the seriousness of the above mentioned crime, the huge loss suffered by the Chinese victims and the friendly relations between China and Kenya, the Chinese government further requests the Kenyan government to repatriate the above mentioned suspects back to China at an early date for further investigations and prosecution,” said Mr Liu’s letter.

When asked to comment, the Ministry of Foreign Affairs said it does not comment on diplomatic issues through the media.

“By policy, the Government of Kenya and for that matter Ministry of Foreign Affairs and International Trade responds to any diplomatic communication, be it from the Chinese government or any other foreign government, only through diplomatic channels,” a statement said.

But early this week, Foreign Affairs Cabinet Secretary Amina Mohamed said Kenya and China have been discussing some form of “judicial cooperation”.

On Thursday, National Assembly Committee on Defence and Foreign Relations vice-chairman, Mr Barre Shill, said the pressure from the Chinese is “not logical.”

“These people (are suspected to have) committed crimes in Kenya; until we finish with them, there is no reason we should repatriate them. If the Chinese government has a case with them, let them wait after we are done with them,” he said.

“My suspicion is that the Chinese may be using this ploy to have the suspects set free. If the offence was committed in Kenya and is contrary to the laws of Kenya, then Kenya should try them,” he said.

Sources within the Kenya police said the Chinese government had presented “findings” that the suspects electronically siphoned over 100 million Yuan (about Sh1.5 billion) from unsuspecting Chinese citizens.

The letter follows a series of diplomatic efforts that China has used since the suspects were arrested last month.

“Available evidence shows that this is a case of fraud launched from outside China against Chinese citizens inside China and the suspects used very simple measures.

“What we want is to repatriate these citizens so that they will undergo fair trial inside China instead of getting released here in Kenya,” he said after meeting President Uhuru Kenyatta at State House, Nairobi.

The Foreign ministry later clarified that the visit had been planned long before the suspects were arrested, although sources indicated that Mr Wang’s visit took more time on the case than on review of the status of bilateral agreements signed between the two countries last year.

Kenya and China have no agreement on exchange of prisoners.