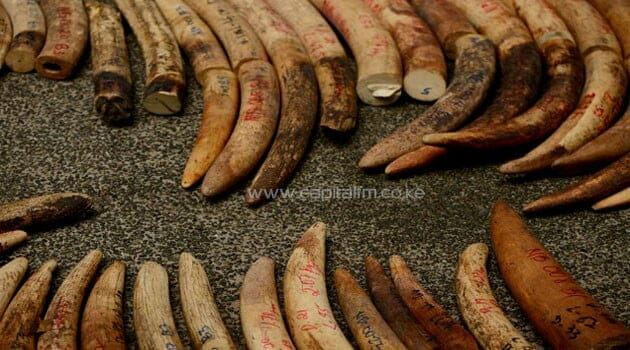 Beijing has imposed a one year ban on imports of ivory carvings, but questions remained Friday on its effect on rising Chinese demand, which critics say could push wild African elephants to extinction within a generation.

The move comes days ahead of a visit to China by Britain’s Prince William, who has campaigned against illegal wildlife trafficking and is expected to speak on the issue during a stop in the southwestern province of Yunnan next Wednesday.

The measure took effect Thursday and was announced by China’s State Forestry Administration in a statement posted on its website.

China is a signatory to the Convention on International Trade in Endangered Species (Cites), but conservationists say it is the world’s largest consumer of illegal ivory, with skyrocketing demand leading to the slaughter of tens of thousands of African elephants each year.

But the Chinese move may prove largely symbolic as most illegal ivory is smuggled raw, and there is a significant ivory processing industry inside the country.

Regulated sales of ivory carvings are legal in China, which has a long tradition of such decoration, and items are popular with Chinese collectors who see them as a valuable investment.

The raw material is often intricately carved to depict anything from devotional Buddhist scenes to wildlife and bizarre fantasies. It is also turned into the seals or “chops” used to sign documents, and more mundane household objects such as chopsticks.

Under Cites, almost all international commerce in ivory is banned, although some limited categories such as licensed hunting trophies are legal and there have been occasional approved “one-off” sales of stockpiles by African countries.

Campaigners condemn such disposals as actually providing cover to the illegal trade.

The one-year timeframe for the ban on carving imports “is designed to assess the effects”, Xinhua reported, but it was not clear what impact it would have — if any.

An official at the State Forestry Administration told AFP that China’s last major legal ivory acquisition was in 2008, when 62 tonnes were purchased at a one-off auction, and since then “there have not been significant imports”.

Globally, the vast majority of illegal ivory seizures by weight are of the raw material, according to Cites’ Elephant Trade Information System database, documents on the Cites website show — more than 90 percent in 2011.

Chinese forestry ministry official Yan Xun said in May 2013 that the country had 37 legal ivory processing firms and 145 sales companies according to Chinese media reports.

Between 800 to 900 smuggling cases are detected in China every year, according to customs statistics cited by the state run Beijing Youth Daily — which said more than half of businesses dealing in legal ivory are also involved in illegal trade.

China has come under increasing international pressure on the issue in recent months.

Last year, Prince William appeared in an advert against the illegal wildlife trade along with footballer David Beckham and Chinese basketball superstar Yao Ming, who said: “I want our children to be able to see elephants in the wild.”

A joint report in December from Save the Elephants and The Aspinall Foundation campaign groups found that more than 100,000 wild elephants were killed from 2010 to 2012, with their slaughter largely fuelled by the “out of control” illegal ivory trade in China.

China is making efforts to stem the trade, the report’s authors said, including closing down at least 10 officially designated factories and jailing hundreds of dealers, but the measures were not going far enough.

“Every metric on the ivory trade has exploded upwards in recent years,” they said. “The prices of raw and worked ivory in China, number of licensed carving factories, retail outlets both illegal and legal, items on sale, all have shot up.”

But Chinese officials have denied that demand in the country is rising.

The number of wildlife smuggling cases in China dropped 70 percent last year from 2013, the paper reported.

“China advocates that the international community make joint efforts to protect the endangered species of elephants,” he said.