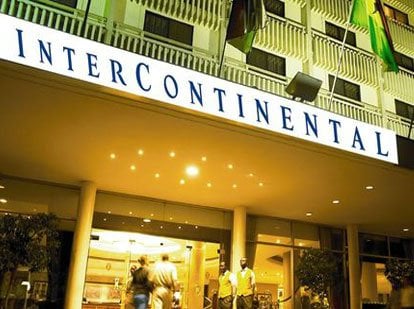 CAPTION: The Intercontinental Hotel Nairobi, where a CEO of a Telco hosted editors and Bribed them with airtime and a power-bank.

Citizens of Kenya were shocked to discover that over the past weekend, court-scribes who also double-up as business journalists of mainstream media houses were convened at Hacienda Sports Bar and Grill in Ngara.

The CEO, an immigrant from a far-flung nation prides himself in sponsoring small jazz events, yet a recent start-up called Sport Pesa has made an impact in the country by sponsoring sports and even expanding out of Kenya.

Court-scribes and Business journalists it turns out could have been given a better bribe package than the cheapskate editors at mainstream media houses, including print, television and radio stations. In a deal negotiated by the Secretary of the Court Scribes Association Carol Maina, each journalist was supposed to get a cash fee of Kshs. 15,000.00 for tilting public in favour of the Telco and portraying Nyakundi as a purveyor of lies and delusions.

Turns out that Carol Maina telephone number 0721-336-210 working for The Star is a good negotiator, and props should be given to her because it has also emerged that editors were summoned by the same CEO at InterContinental Hotel Nairobi last Friday 29th July 2016 for lunch. During the meeting the CEO  threatened to sue any media house that portrayed him in negative.

He also said categorically that he will deny advertising revenue to any media house that mentions him adversely with regards to scandals highlighted by the same blogger. The CEO recently came under fire for corruption and extortion after an audit revealed massive discrepancies and irregularities in tendering and asset-acquisition, credible enough to send the Finance Director packing.

The CEO can feel the pressure building up as Kenyans no longer hold him in awe as they did a year ago. We would like to take credit for debunking any myths surrounding this character, and glad that we exposed him for the impostor that he is, intimidating mediocre journalists and editors using the purse-strings of a public company.

The editors were Bribed with Kshs. 5,000.00 airtime, and a Powerbank after being lectured like kids and eating lunch purchased by the CEO. That’s how cheap editors in Kenya have become. A rotten media-corps whose only work is to cheer-lead and cleanse the images of crooks in the country.

These editors are people with families and children, plus younger journalists who look up to them as role-models. But when they see their seniors getting bribes in the form of bribes, they become even more disillusioned. It’s disheartening that none of the editors turned down the power-bank and airtime out of principle.
Is this what they want their children to turn into? Do those editors want their daughters turning into commercial sex workers who sell themselves for financial-recompense? Because that is simply how they are also operating, selling their careers for a few coins.

Shame on the editors who attended the meeting with the CEO of the corrupt Telco. Shame on you for disrespecting all journalistic ethics. Shame on you for setting a bad example to those younger than you. You’re all just pieces of shit who should resign and pave way for individuals with pride and morals to occupy your positions.

Again, we challenge the CEO’s of the struggling media houses to verify if my claims are false.