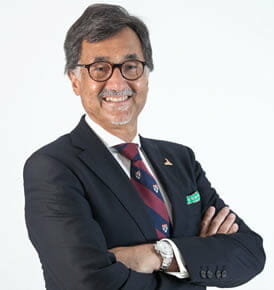 Chase Bank Kenya is now under receivership as noted by the circular from Central Bank Kenya as attached. To everyone, make it a habit to listen to us, not mainstream journalists who had been bribed to lie that the bank is on a healthy financial position. We told you to move your money asap yesterday at 3pm. The Bank closes at 5pm. So that was adequate time to move your chums. 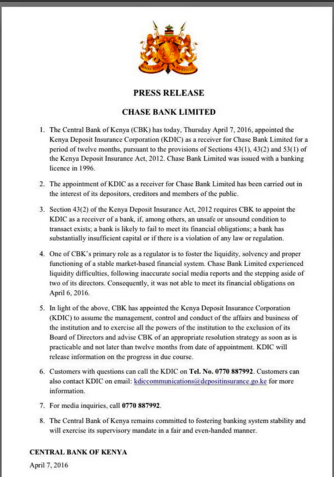 Here are the basic survival tips in Kenya. Don’t trust mainstream media, make blogs your source of information. Don’t trust corporates because in Kenya, they largely operate without regulation and have become a law unto themselves. Don’t trust a politician, whatever side of the political divide they are in. And finally, never listen to church leaders because they have become mouth-pieces of state propaganda.

There are two explanations as to what cause Chase Bank’s closure. One is the textbook explanation and the other is the conspiracy-theorist explanation.

Here is the textbook explanation. A number of reasons have contributed to Chase banks problems. Key among them is understating loan portfolio, insider lending and overstating their profits. In the Financial Year (FY) 2014, Chase Bank made profits of Ksh 2.3 billion. Total Assets for the bank was at Ksh 107 billion while Liabilities were Ksh 96 billion. The banks core capital was Ksh 11 billion. In the same FY 2014, the bank had borrowed Ksh 15.5 billion, loans to customers was Ksh 64.4 billion, staff loans was Ksh 1.8 billion and director loans at Ksh1.37 billion.

In the Financial Year 2015 September, the bank’s profit declared remained the same at Ksh 2.3 billion, loans to customers increased from Kshs 64.4 billion to Ksh 73 billion, staff loans increased to Ksh 2.2 billion and Director loans at Ksh 1.6 billion. Audited Accounts for the FY2015 reveal major changes between October 1st and December 31st. In just three months Director Loans grew from Ksh1.6 billion to Ksh10.5 billion. This is the beginning of Chase Bank problems. It means that eight directors of Chase Bank borrowed Ksh 9 billion in three months. Between October, 2015 and December, 2015 non-performing loans grew from Ksh1.7 billion to Ksh10 billion, an increase of Ksh 8.3 billion. But why should non-performing loans grow from Ksh 1.7 billion to Ksh 10 billion to a bank that had managed to maintain them at Ksh1.3 billion? Loans become non- performing if they are not serviced within 90 days. For Chase Bank to say that Ksh 8.3 billion of new loans are non-performing yet they came into books within 90 days, they are not being honest. This is fraud!

Here is the conspiracy-theorist explanation for those not so keen on numbers. This is what happened to Chase Bank. It posted a Kshs. 6 Billion loss, but a further Kshs. 10 Billion was siphoned out of the country. Now if you read historical news, you will remember that around 2 weeks ago, Trans Century announced that some Argentinian investor had pumped in money to rescue the investment firm, that has been dogged by an 8.1 Billion loss.

This is why we always advise Kenyans to be wary of Kibaki/Uhuru era Kikuyu old men, who are thieves beyond measure. Any person linked to Chris Kirubi, Jimnah Mbaru, Jeremiah Kiereini, the late Njenga Karume, and the likes is a thief and a train-wreck in motion. And the worst part of all this shit is that these characters are the one who advise the President on policy.

The solution to the mess in this country is only a revolution. Our opposition despite the whistles and heckling, is also part of this mess. They have watched in silence as corporates screw Kenya to its death-bed. Opposition legislators such as Ababu Namwamba are on Statehouse payroll. We recently saw how a parliamentary committee cleared Petroleum PS Andrew Kamau Nganga, with the glaring conflict of interest as working for major oil traders in his past assignments. The parliamentary committee has opposition members like Junet Mohammed and none raised a word.

Once again Kenyans, don’t trust mainstream media. Watch news and buy newspapers at your own peril. Kenya has been built on a very shaky foundation and the cookie is just about to crumble.