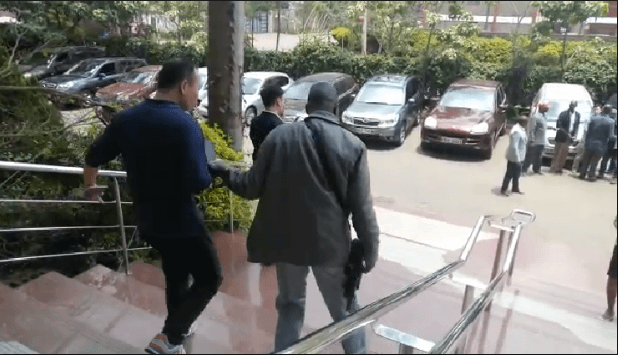 A week after the police raided the Chinese TV CGTN at Krep centre near Yaya centre, it is now emerging that the raid was staged, although most workers were caught off guard, most of the targeted illegal workers seem to have gotten wind of the raid prior to the day hence never showed up on that particular day.

Those working on tourist visa had travelled a week before while the ones that could have been caught on the day of the raid hid in offices, toilets and under their desk. For instance, the iron fist lady head of broadcast division Hu ya locked herself in the men’s toilet, Leo Ling, the man who has been harassing local workers locked himself up in his office and Shen Jing who is the boss of the newsroom had travelled a week before.

Most of these mentioned have been in Kenya since 2010 and have obviously overstayed their work permits or they are renewed through dubious means. Poor pay to the locals has pushed some of the locals to engage in shameful acts aimed at pleasing the Chinese to favour them with hefty bonuses. Interestingly, one of them was seen confronting the cops allowing some illegals to run and hide, others helped some Chinese to escape.

In a meeting held a week after the raid, the Chinese were singing songs of praise to their so-called heroes and of course, they will be awarded hefty bonuses.

It is also emerging that the Chinese bosses have a different payroll while all Kenyans and foreign non-chinese workers that have valid work documents are on a different payroll. The Chinese have hired a company called bright vision which is used for hiring the non-Chinese workers and this where the locals also fall. The salaries are dictated by the Chinese who are directly hired by CCTV Beijing. The salaries sent from China are later reduced and paid to local and non-chinese foreign staff through bright vision media.

After the raid, the fellows working on tourist visas are leaving for China to re-strategise, those leaving are Leo Ling, Shen Jing Hu Ya among others and will be back in a months time.

In a more interesting event, Leo engaged in shameful propaganda by ordering Beatrice Marshal and Ondeko Aura to use their connections to book an interview with the police spokesperson for an apology that never sufficed.

Leo went ahead and lied to Beijing that the apology had happened. The Chinese foreign ministry went on air claiming that the Kenyan government had apologized, but the apology never showed up on the police social media as the Chinese would have liked.

During the meeting, Leo Lin told the staff that he is here to stay and that he is not going anywhere anytime soon. One of the Chinese staff whose time was up after working here for seven years left but with the help of Tim Barasa and Eunice of administration department who have connections at the immigration department. He was able to be sneaked in using a back door, he goes by the name of Nicolase.

Some Chinese techs have been assigned the duty of monitoring calls and the emails of locals trying to obstruct Beijing from knowing the truth about what happens at CGTN Africa.

They are also accusing some disgruntled former staff of their troubles, Beijing should know how corrupt their fellow Chinese are here in Kenya

It is also well known that some locals who receive the hefty bonuses are used to perform those corrupt deals up to including bailing the Chinese when they are caught on the wrong side of the law.