Police have arrested the CEO of Mama Lucy Kibaki Hospital Dr Emma Mutio and two others as investigations into the theft of babies scandal at the controversial health facility intensify.

The Directorate of Criminal Investigations (DCI ) said Dr. Mutio is leading a baby theft syndicate at the hospital that involves many players and not only the health workers.

She is was arrested together with the facility’s administrator Dr. Regina Musembi and one Makallah Fred Leparan.

Mutio appeared before the Milimani court on Wednesday where Inspector Wanga Masake from the Kilimani police station told the court that the DCI has received information that the three are trafficking children in Umoja and Embakasi areas. 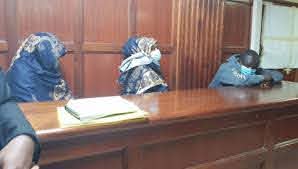 The arrest follows an expose by BBC on baby theft at the facility and information obtained from Mr Leparan about their involvement in the crime.

According to the BBC exposé, innocent babies are sold at Mama Lucy Kibaki hospital at a cost of between Sh100,000 and Sh300,000.

Mr Leparan was captured negotiating with undercover reporter in a scheme to sell a child who had been abandoned at the hospital.

He was also captured receiving a large sum of money after handing over the three babies to the journalist.

“We have reasons to believe this is a well organized criminal gang that is operating within the country whose other players are yet to be established,” Masake said.

Mutio and Musembi have been overseeing the operations by Leparan in their baby theft syndicate. They sell as young as one day old babies.