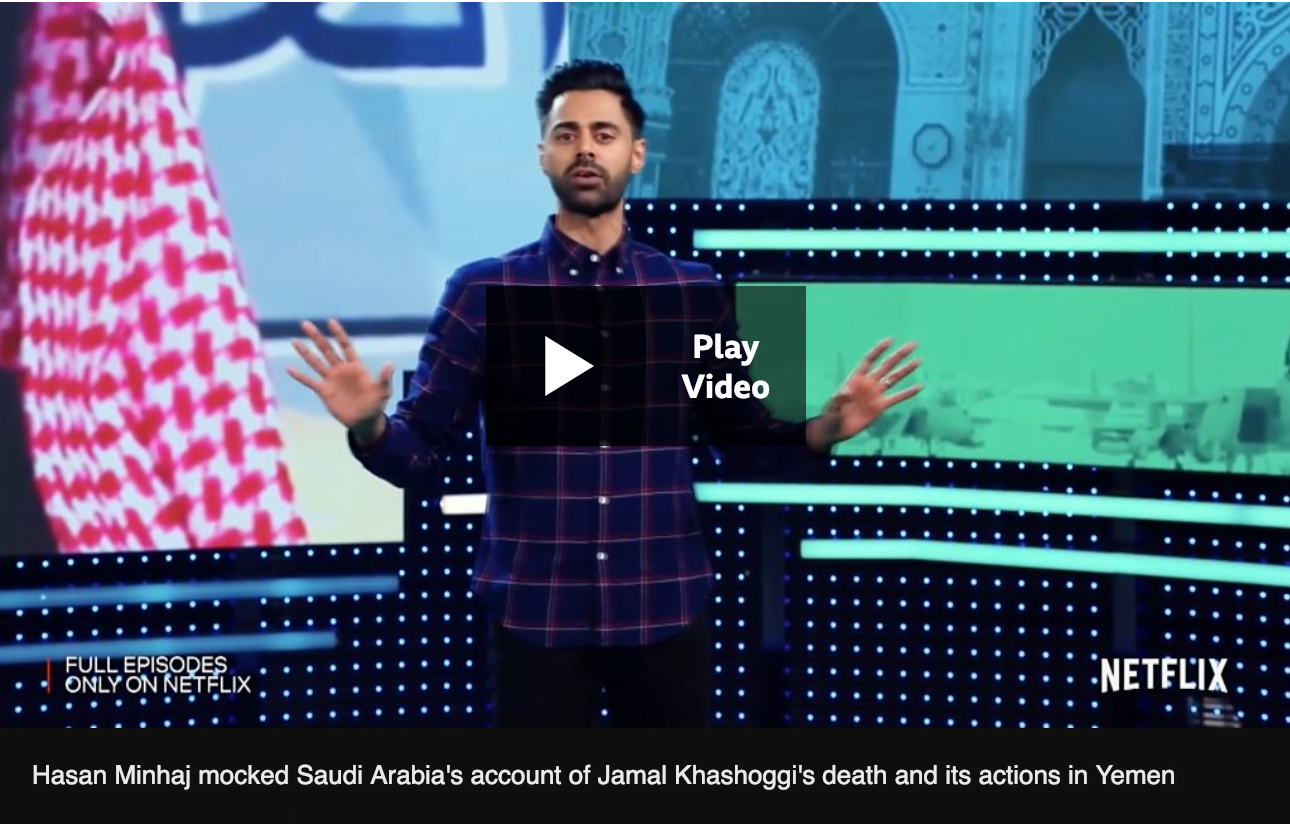 Netflix has removed from its streaming service in Saudi Arabia an episode of a comedy show critical of the kingdom.

The second episode of Patriot Act With Hasan Minhaj was removed following a legal demand, which reportedly said it violated a Saudi anti-cybercrime law.

It features Minhaj mocking the actions of Saudi officials following the murder of the journalist Jamal Khashoggi and condemning the crown prince’s policies.

Netflix said it backed artistic freedom but had to “comply with local law”.

Despite the move, people in Saudi Arabia can still watch the episode on the show’s YouTube channel.

Khashoggi, a prominent journalist and critic of Saudi Crown Prince Mohammed bin Salman, was killed in the Saudi consulate in Istanbul on 2 October.

Saudi officials initially insisted the 59-year-old had left the building alive. But they later acknowledged that he was murdered by a team of Saudi agents and that his body was dismembered before being disposed of elsewhere.

What did Hasan Minhaj say?

“Just a few months ago, Crown Prince Mohammed bin Salman, also known as ‘MBS’, was hailed as the reformer the Arab World needed. But the revelations about Khashoggi’s killing have shattered that image,” said Minhaj in the episode of Patriot Act removed by Netflix. Since being named second-in-line to the throne in June 2017, Prince Mohammed has introduced a raft of headline-grabbing reforms, such as lifting the ban on women being allowed to drive and seeking to shift its economy away from oil.

But, he has also been criticised for escalating a crackdown on dissenting voices, among them a number of women’s rights activists, pursuing a war in neighbouring Yemen that has caused a humanitarian catastrophe, and starting a diplomatic dispute with Qatar that has divided the Gulf Co-operation Council.

“And to those who continue to work with him, just know that with every deal you close you are simply helping entrench an absolute monarch under the guise of progress because ultimately MBS is not modernising Saudi Arabia. The only thing he is modernising is Saudi dictatorship.”

Why did Netflix remove the episode?

The streaming service said in a statement: “We strongly support artistic freedom worldwide and only removed this episode in Saudi Arabia after we had received a valid legal demand – and to comply with local law”.

.@hasanminhaj of @patriotact has been a strong, honest and (funny) voice challenging Saudi Arabia + Mohammed bin Salman in the wake of #khashoggi’s murder. He brought awareness about Yemen.

Quite outrageous that @netflix has pulled one of his episodes critical of Saudi Arabia.

The Financial Times reported that Saudi Arabia’s Communications and Information Technology Commission had warned Netflix that the episode violated the kingdom’s anti-cybercrime law.

Article 6 of the law prohibits the “production, preparation, transmission or storage of material impinging on public order, religious values, public morals and privacy” on the internet.

Khashoggi’s editor at The Washington Post, Karen Attiah, tweeted that Netflix’s decision was “quite outrageous”.

Human Rights Watch’s Middle East director, Sarah Leah Whitson, said the streaming service’s claim to support artistic freedom “means nothing if it bows to demands of government officials who believe in no freedom for their citizens”.

Reporters Without Borders, a press freedom watchdog, ranked Saudi Arabia 169th out of 180 countries for press freedom in a list published in October.

Does Netflix limit the shows available in Saudi Arabia?

Netflix is available in 190 countries around the world, with more than 137 million people counted as subscribers.

However, the streaming service’s licensing deals prevent its content from being made available everywhere.

People in the US have the biggest pool of TV shows and films to choose from- 1081 and 4579 respectively. Those in Saudi Arabia can access 176 shows and 468 films.

When asked if political reasons affected which shows it chose to license for each country, a Netflix spokesman told the BBC it recognised that “different countries have different laws around what content is allowed”.

“While we may disagree with some of these laws, we comply with valid legal requests to remove content in different countries,” he added.