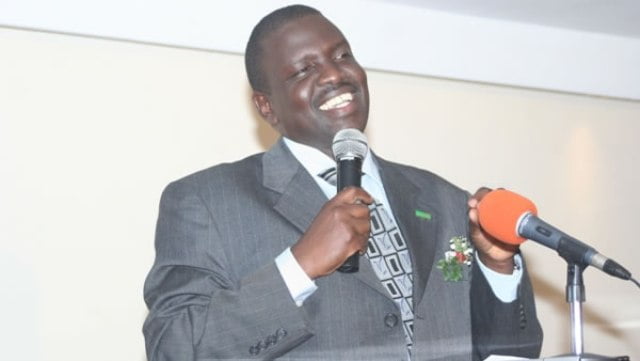 CAPTION: Uchumi CEO Julius Kipngetich who made a fortune selling ivory from poached elephants during his stint as KWS boss. During his stint, poaching in Kenya rose to record-highs.

RE: EX-UCHUMI STAFF CRYING IN THE COLD FOR NON-PAYMENT OF FINAL DUES AFTER UNPROCEDURAL ‘REDUNDANCY & EARLY RETIREMENT OFFER’ WHO WILL SAVE THE HELPLESS KENYANS??

We appreciate the role you are playing to expose corporate fraud and human-interest stories. Please continue doing so despite corruption being a ‘cancer’ and injustice in our Nation, our hope is that things will change.

Now, Uchumi supermarkets Ltd since the change of management in September 2015, with Kipngetich coming on board became the worst run in the history of Uchumi and any staff that has been there before can confirm this.

Why? Because this was the time they destabilized staff, closed branches, introduction of witch-hunt by the ‘new’ management team, suppliers apathy, worst relationship ever in history with suppliers and other partners. Kipngetich and team never cared at all because in their minds  they joined the organization to send away – ‘thieves’ in the cadre of ‘old staff’ their target being senior management and branch managers.

He brought in a team of so called ‘experts’ who had no retail experience and were not willing to learn, created positions that are ‘redundant’ e.g. head of fresh, supplier relationship manager, Revenue protection unit, corporate sales manager,  ; and realizing that the staff costs were getting higher, he came up with some irrational ‘cost cutting’ strategies that will or have hurt Uchumi business big time and have left many Kenyans suffering!

To everyone’s surprise, staff went only with letters home and since Uchumi had both unionisable and management staff, the union went to court and Uchumi had to pay all unionisable staff while out of work for almost over 6 months, later in November 2016 recalled some of them to work. No management staff was paid even a SINGLE CENT of their dues owed by Uchumi ….how inhuman)))) some of them went to court, I’m not sure the outcome but to date no pay from Uchumi.

He then decided to give an offer for early retirement to his targeted managers on the 9th of August and wanted response by 12th August, through his unprofessional and uncouth HR- business partner by name Peris Mwangi, an IT expert who had zero people management skills.

12 managers accepted after we realized it was a better to have the pay than working in such a hostile environment full of negative energy and frustrations. We took the offer in August 2016 and to date Uchumi supermarkets have not paid our dues only giving excuses that they were waiting for the source of funding from government that had delayed. Any reasonable employer planning to carry out such an exercise in an organization should be able to have the finances ready so that when staffs are leaving they have their pay. Why is Kipngetich above the law? Why does he handle staff as liabilities?? We don’t have money to hire lawyer but are crying for justice to be done…Who will help us here?? Many staff are out waiting to be paid?? is it the Government? Which ministry? Who to call on? Or is it COTU? Which labor organization?  to help these hard working Kenyans

Nyakundi, Kipngetich has potrayed evil heartless behavior he should be exposed! he should be reminded that his arrogance will not take him anywhere. Let him know that what Uchumi is undergoing partly are curses from those staff that he sent away in the cold, called them thieves, he even went to an extent of calling the slum dwellers…the sooner he resolves this issues the sooner he will see a big change in Uchumi! ! this business does not need PR but action