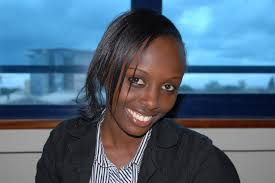 Just recently, she applauded the Energy Regulation Commission (ERC) for lowering fuel prices saying that it will allow Blue Subaru owners, who live in Roysambu apartments to finally drive their noisy toys which have been rotting away in their basement parking.

Njoki Chege’s persistent attacks on Subarus  have offended many car enthusiasts, including KTN’s news anchor, Betty Kyallo, who feel that  the fiery writer does not understand the strength and the beauty of the Subaru vehicle.

Laying her sentiments through social media, Betty, who is a proud Subaru driver, urged Njoki to stop being an ignorant person who judges others based on the type of vehicle they drive.

The eloquent news anchor also sought to educate the popular writer on why the powerful Subaru is not a car for boys.

Below is what Betty Kyallo shared on social media:

“BLUE SUBARU UPRISING
There are some people … hahaha… who am I kidding, just one person who has decided to use their space to misinform and insult people based on what I can only imagine as their own insecurities. Usually I don’t care, but there has been a constant vilification (that’s criticism for you) of Subaru owners and especially BLUE SUBARUS … which is utterly juvenile… so indulge me for a second.
Motoring aficionados like myself appreciate a good vehicle, more so a championship winning one like Subaru. As a young child many years ago, my bedroom wall was cluttered with newspaper cuttings of Patrick Njiru’s BAT sponsored Subaru literally jumping off a deep rut at full throttle.

This image is still vivid today some 20 years later. As a child I asked myself what made a Subaru A Subaru: is it the loud ear splitting exhaust note or the deep engine warble of the EJ20TT flat four with 16 valves? These questions became my focus for many years until I became well aware of what makes the Subaru brand achieve such love and (undeserved, infantile and always ignorant) hatred at the same time.
The founding fathers at Subaru wanted to be different from the Toyotas and Nissan’s that had already made a name for themselves in Japan and beyond. With extensive knowledge from the aviation industry, Fuji Heavy industries (Subaru’s parent company) decided to power their vehicles with the aircraft derived ‘boxer’ engine coupled with its symmetrical drive train layout.
Get it? … Good!
Three world championships later and Subaru became a success story. The 555 Impreza with the blue and yellow livery, massive rear spoiler, ear deafening exhaust with gold Enkei rims became synonymous with every 12 year old in the 1990’s.
Back to reality all the boys and girls (oh yes… we love them too) who loved Subaru are grown now, with the ability to buy that Subaru that made them feel like super heroes. So when you see a fast and loud Subaru zoom past you (if you are able to), remember that that’s a man or a woman living a childhood dream. Yes sometimes these ‘boys’ get carried away with these fast machines but always remember when you are in your tiny hatchback, don’t hate but appreciate.
The thrill derived from driving a turbo-charged Subaru is second to none, that handling precision of its dual inverted struts, 300 Horse Power + 2000cc EJ20TT engine and symmetrical all wheel drive with driver controlled central differential unit all in one package is a heavenly feeling that your hatchback will never at any time achieve.
Word to the ignorant, you cannot judge a person by the car he/she drives… but seeing as you already have, you have inaccurately labeled the Subaru driver a ‘boy’. But you know or maybe you don’t… Boys don’t handle heavy machinery like the Subie and only boys care for such ludicrous opinions. Peace!
Betty Kyallo, Proud BLUE Subaru Owner, Car enthusiast
Trevor Lamenya, petrol head”
FOLLOW ME ON TWITTER CYPRIAN NYAKUNDI
Would you like to get published on this Popular Blog? You can now email Cyprian Nyakundi any breaking news, Exposes, story ideas, human interest articles or interesting videos on: [email protected] Videos and pictures can be sent to +254 710 280 973 on WhatsApp, Signal and Telegram.