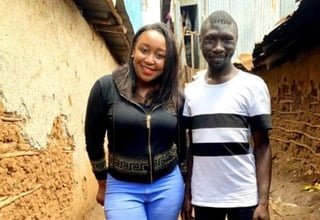 As the country grapples with escalating infections largely due to the four corrupt Government officials (Fred Matiangi, James Macharia, Sicily Kariuki and some obese schemer called Rachel Omamo) who allowed a Chinese plane to land at JKIA in February, over and above the lack of closure of our airspace to foreign traffic, Kenyans are counting other Covid induced-tolls threatening the entire existence of our social fabric as we know it. Slay-Queens have gone conspicuously quiet on social media, unable to post snapchats of IG videos of their exploits, which primarily consisted of expensive dates, fine dining and 5-star clubbing experiences.

One Congolese handle @MistaChampagne drew our attention to this state of affairs, questioning “Badada” and why they’re suddenly off the radar, despite their noisy presence on social media in the recent past.

In previous days, social media was ungovernable as ladies flaunted their imaginary wealth, many who live in absolute squalor but floss on social media as if they’ve been raised on generational wealth. It just goes to show how married men continue plundering the futures of their families in pursuit of vanity, as they underwrite the delusions of grandeur for these ratchet side-chics.

One very famous Instagram whore going by the name of Haentel Wanjiru is currently under quarantine as she is a carrier of the dreaded Corona Virus, acquired from her clandestine affair with Kilifi Governor Amason Kingi. A fraudster of epic proportions, Kingi continues to plunder the resources of peasant-riddled Kilifi County, while bankrolling ladies of questionable lifelines, in a bid to mask his inferiority complex derived as a consequence of his short man syndrome. He uses money meant to elevate the lives of peasants in Kilifi, to entice Nairobi socialites into sleeping with him. He doesn’t understand that the amount of money he drains with Haentel can help in poverty eradication measure in Kilifi, where 17 children recently died due to lack of medical attention at the County run health facilities.

For your information, if you have interacted with Haentel, kindly self quarantine because she is the type of person who can cause an exponential havoc due to her large following and sexual demand. We hope the Government is monitoring her calls and movements to avoid the spread of Corona, and the areas inhabited by these IG hoes (Kilimani-Kileleshwa-Westlands) seems like the epicentre of Nairobi’s outbreak.

This addiction for cheap thrills is invertedly fuelling the greed for money, thus draining our coffers with utmost prejudice. Only yesterday did the media beloved John Lonyangapuo, emerge the the laughing stock of the country after his nudes were leaked by some slay queen he was bedding for Kshs. 500,000 for a measly orgasm. A whole professor getting played by a street ratchet is proof that education is no longer the key. Do better Lonyangapuo. Unlike Githeri Media who get thrilled by your cheap theatrics, the rest of us know you’re just a massive fraud. Sasa unakula Malaya and just the other day you were asking donations for hunger relief in your poverty-stricken county? Terrible.

All the money you see by socialites flaunting on social media comes from your taxes, its a pity that the financial “gurus” at KRA have never thought of connecting the money trail.

The truth is that the hoodrats who set standards on social media live below the poverty line, and most can’t even show you a fully furnished bed-sitter, let alone apartments. They were misled by older veterans that likes and views will eventually translate to social capital which can be converted to equity, but Corona has come and they’re now left scrambling for scraps and pretending to go natural as they post photos without fake hair or make-up.

That said, we are also witnessing next-level meltdowns, almost rivalling the Chernobyl or Fukushima nuclear power plant meltdowns. We always believed the hype that Betty Kyallo is a strong personality who has grown thick skin from all the trolling and drama that never seems to leave her side. But a convergence of psycho-sexual deficiencies seems to be taking a toll on her as she went on a rant, clearly inebriated with some cheap liquor that she is not used to consuming. With the sudden scarcity of sponsors who spoil them slayqueens with choice drinks like Moet Champagne, your favourite IG models are back to the basics, hooking themselves up with Konyagi and Captain Morgan.

Due to the Corona Virus, Betty was forced to close her beauty parlour creating the first level of pressure in her life. Secondly, her Somali sponsor has been forced to retreat back to his wife and kids in quarantine, lest his philandering ways exposes them to the dreaded sickness. Don’t forget that Somali’s live 40 people in one house, thus escalating potential collateral damage, With an absentee sponsor and a close business with 20 retrenched staffers, the pressure seems to be building and the walls are closing in.

The same scenario is replicated in numerous locations across the country, as dependants of sponsors retreat back to poverty to eat gather and drink porridge as was aptly narrated on a viral video by Dee Cherono.

Married men have now retreated back to their cocoons and because most of them fear their wives and love their children, they cannot risk exposing them to the virus. We hope that they can utilise this period to re-invest time and resources to their families instead of diverting very necessary capital to slay-queens whose money, unfortunately, does little to grow the economy. Their consumption patterns are geared to escalate capital flight, by buying designer wear, drinking foreign drinks and make-up mostly imported and with insignificant impact on our domestic industries.

Alternatively, married men can continue bankrolling their side-dishes and we will see what that investment will yield in the long run.