The struggling national carrier Kenya Airways (KQ) has been on a loss-making streak for quite a while.

While KQ makes losses, it has now emerged that the top management smile all the way to the bank. 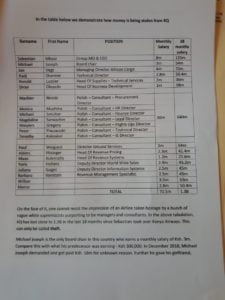 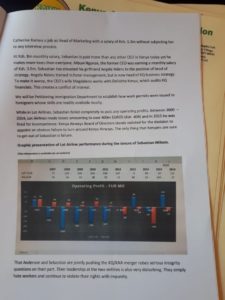 Former Safaricom CEO Michael Joseph earns Ksh. 3 million, the highest in the country for a board Member. His predecessor is said to have earned Ksh. 300,000 per month.

Joesph is also accused of hiring his mistress a Ms. Catherine Kamau, without following the KQ’s Human Resource process and paying her Ksh. 1.3 Million a month.

In 2017, the cash strapped national carrier shocked Kenyans when they hired consultancy firm McKinsey and Company for Ksh. 2.3 billion. The money was paid in ten months.

The contract was ended after public uproar. However KQ clarified that the airline will use McKinsey’s services on a needs basis as opposed to the previous arrangement where the firm had permanently set up shop at the airline.

Before McKinsey, KQ had hired a US based financial consultancy firm Seabury to advise on its restructuring in 2015.

In the same year, the National Treasury loaned the struggling airline Ksh. 4.2 billion in an effort to surmount challenges brought about by challenges in the West African Market due to Ebola outbreak and increase in fuel prices. KQ had made a net loss of Ksh. 10.5 billion.

Kenya Airways has been cash strapped since its planed fleet expansion dubbed ‘project mawingu’ flopped. Project Mawingu, and other factors, sunk KQ into a Ksh. 25.7 billion loss in 2011.

An Audit by PriceWaterHouseCoopers (PwC) 2011 – 2015 revealed that the airline’s Ksh. 25.7 billion loss was occasioned by a combination of factors accumulated over the years. One of those factors is the delay that happens between ordering and actual delivery of aircrafts. This is a common practice in aviation industry and takes about 4 years.

The planned takeover of JKIA and merger of KQ and KAA is said to be occasioned by loss of business at KQ.

The proponents of the merger say that the airline needs to manage the airport to increase its revenue stream.

Opponents of the merger see this as a hostile takeover of their airport by the two banks controlled by the Kenyatta family.

Parliamentary Investments Committee (PIC), raised alarms over conflict of interest in the deal.

The chairperson of the board of KAA Mr. Isaac Awuondo is also the Chief Executive of Kenyatta-owned CBA bank.

Nandi Hills MP Alfred Keter raised the possible conflict of interest when he appeared before PIC as a friend of the committee.

“The two banks are in a merger negotiation and this raises the issue of conflict of interest. Probably, the chairman has realised KQ has no capacity to sort out the loans hence the merger,” Mr Keter told PIC.

Mr. Muturi instead ruled that the departmental Committee on Transport Public Works and Housing is the right team to handle the proposed deal as opposed to PIC.

Kenya Airways seems insolvent at this point in time and might not recover. Mr. Mikosz doesn’t have the mettle to steer the company to profitability as his work experience with Lot Airlines between 2009 – 2014 shows.

CNYAKUNDI.COM will be bringing you updates on these issues.