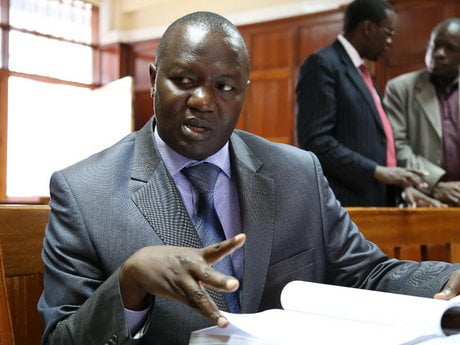 Via The Kenyan Digest Local Blog.

Besieged Nairobi Lawyer Tom Ojienda has now come under the spotlight as some female students threaten to expose the top lawyer over what they allege as sex-for-marks, a toxic practice in many Kenyan universities.

Ojienda, a “top’ lawyer, that former Nairobi governor Evans Kidero usually uses to launder and clean his ill-gotten money, has gotten himself in the wrong side of law over tax fraud, money laundering and fraud.

Ojienda also teaches law in various universities where he has perfected his art for sex-for-marks. A few senior lawyers that didn’t want to be quoted don’t have respect for Ojienda over his bad reputations.

A cunning fella, Ojienda realized that the only way to stay afloat and get votes is through starting a mentorship programme, that he allegedly uses to mentor young lawyers who actually vote for him because they are the majority.

So deluded are the young lawyers that they vote for such dirty and corrupt individuals with hopes that they will get connections.

In light of this expose by the Kenyan Digest, cnyakundi.com asks any victim of Ojienda’s predatory tendencies to come forward. We will conceal the identity