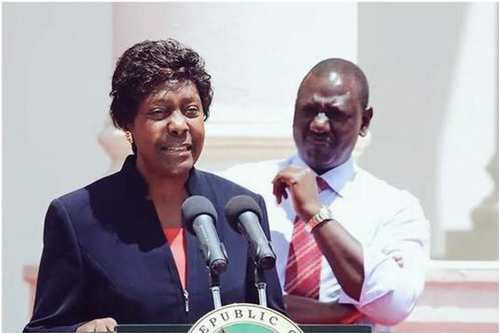 Kenyans have been waiting for Ngilu to name the ” Name behind the names ” All to no avail. The private developer has created a lot of tension within the country with rumors doing the rounds that the guy is non other than the deputy president William Ruto .

At some point, Ngilu almost gave in to the public pressure but sources have revealed to me that a last minute call changed everything. In fact Ngilu wanted to name the ” Real Land Grabber ” . She even gave a hint that she was gonna name the land grabber and resign – showing that the individual is a very powerful man in Kenya.

Ngilu, who joined the Jubilee alliance in the last minute got her job in a controversial way even after the two Jubilee leaders claimed that they were not going to appoint any politician as CS .Ngilu’s dark past in the water ministry has always haunted her. Parliament, which always acts as a rubber-stamp nurturing impunity cleared her.

The main land grabber must be smiling . To put it bluntly, Ngilu’s dark past made her think twice . In case she named the man, her corruption cases would be reviewed . This is a sick country.

Lets be honest. Opportunity comes once in a lifetime. Ngilu should have used this chance to win back the Kamba support where she has become politically useless. If she would have named the main landgrabber, Kenyans would have regarded her as a hero and even fought for her in case of harassment . But then Martha Karua did it and died politically !

As Miguna once referred her, Charity Ngilu is a ” Political Prostitute ” who cannot bite the hand that feeds her .Kenya is yet to have a politician who will make politically incorrect decisions