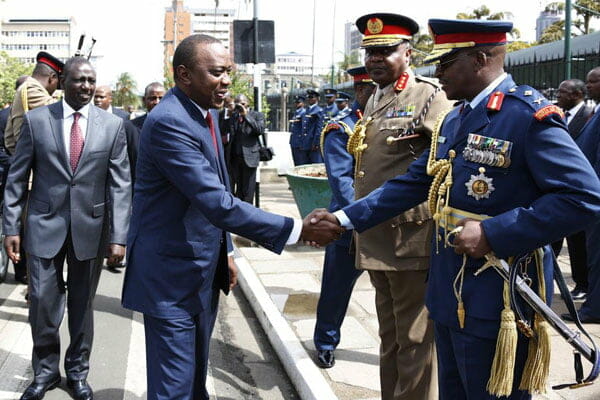 Following last week’s announcement of new faces in cabinet by Uhuru Kenyatta, word going round in Narok county is why he dropped two principal secretaries from Narok.
The East African Affairs PS John Konchella and his Information counterpart Joseph Tiampati were shown the door under mysterious circumstances. Tiampati is a former general manager with the National Social Security Fund. It is said the move by Uhuru had something to do with 2017 politics.
We have information that when Uhuru appointed Tiampati and Konchella his deputy William Ruto was not comfortable with them since the two are his political foes. The two contested the gubernatorial seat in Narok county on a Kanu and Kenya National Congress ticket respectively but lost. They, lost to Ruto’s ally Samuel Tunai.
Ruto’s URP and Uhuru’s TNA have been secretly fighting over the control of Maasai politics. In their 2013 election pact, URP claims Narok and Kajiado counties were URP zones but immediately after elections, TNA began making forays in the region through appointments of Maasai politicians to state jobs. As a result of the deal, TNA was not allowed to field candidates in the region which was perceived to be under the control of URP.
Interestingly, those Uhuru nominated for various positions are people who contested against Ruto’s preferred candidates in 2017. To clip Ruto’s influence in Maasai politics, Uhuru has been working on a plot that will see him establish his own political network in Maasai politics.
Uhuru men are now said to have advised him to penetrate Maasai region and to do this, a number of parastatal jobs went to individuals perceived to be Ruto critics and to counter Ruto’s pointman in the region who is Narok governor Samuel Tunai.
To show how determined Uhuru is to make political inroads in the perceived URP’s backyard, he has on several occasions hosted the anti-Tunai forces at State House.
To make sorties in Maasai politics, Uhuru appointed former minister Julius Sunkuli and his brother Andrew Sunkuli. Julius was appointed as a member of Industrial and Commercial Development Board while his brother, Andrew, heads to Lake Victoria South Water Services Board.
Last week, a section of Maasai elders from Narok county, where both Konchella and Tiampati hail from, protested their sacking arguing they had not been linked to any corruption scandals in their respective dockets.
They claimed Tiampati could have been sacked because of his close working relationship with elected leaders from the county who are opposed to the current governor, Samuel Tunai.
They saw Tunai’s hand in the sackings given that both Tiampati and Konchella challenged him for the governor’s seat during in 2013.
“We are wondering why the Jubilee government is sidelining the Maasai community by sacking our sons,” said former Transport Licensing Board chairman Hassan Kamwaro.
Tiampati was sacked hours after he had been endorsed by elders from the Purko clan to challenge Tunai 2017.
For now, talk is that Jubilee is favouring the Sunkuli family in appointments just as it has done with the Nyachae family in Kisii politics.
Uhuru, however, played it safe by appointing two PSs from the county, including former Ewuaso Ng’iro South Development Authority boss Charles Sunkuli, Environment and Saitoti Torome, Planning and Statistics.
Charles Sunkuli is a younger brother of Julius Sunkuli and Andrew Sunkuli, who both contested the Narok senatorial seat but lost to Joseph Ole Ntutu, who is leading the anti-Tunai forces. Andrew is close to Ruto and was associated with the battle of the ownership of the defunct Kenya Times newspaper with the Moi family where Ruto also had a say.