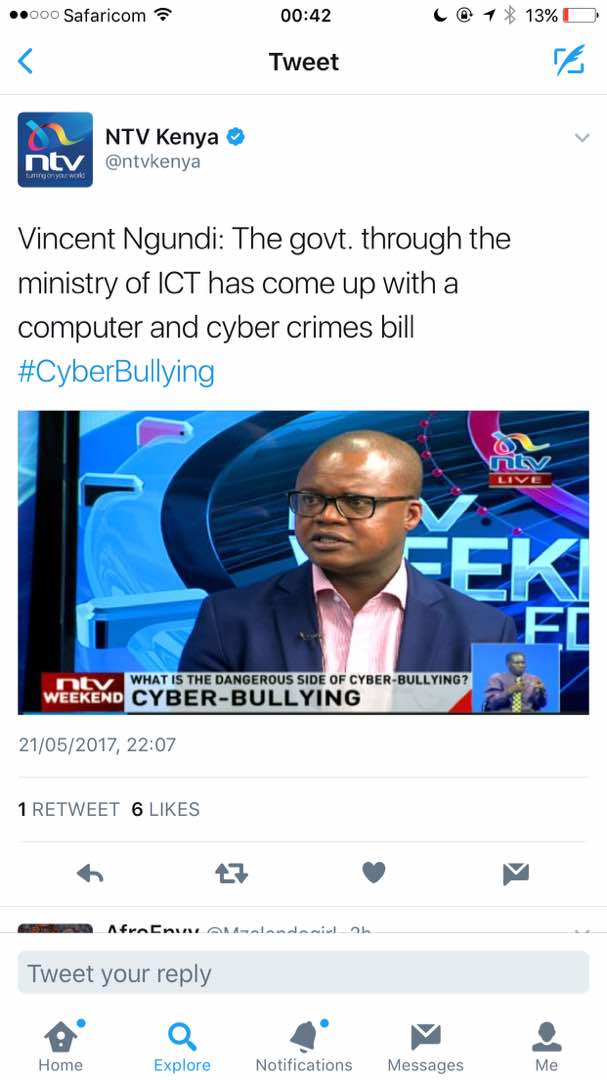 CAPTION: Instead of policing Safaricom to stop stealing our money, Victor Ngundi and other idlers at CA are now busying themselves with Cyber-Bullying.

Nation Media Group, ground-zero for mediocrity as far as journalism is concerned, are at it again. Faced with the grim reality that social media has rendered mainstream media as virtually impotent, NMG became the first to ride on the story of the innocent death of a social media user.

The unfortunate suicide, one of the many which go unrecorded in Kenya, was twisted together with scam-artists to make it look like it was cyber-bullying which caused her to kill herself.

A lady posted a story on Facebook and the resulting conversations have been framed as the cause of death, never mind the fact that the lady had serious mental-illness issues and the dire state has not been mentioned as the cause. It’s always easy to blame everything on social media.

This particular story was paid-PR by Communications Authority of Kenya, the moribund regulator which acts as a gate-keeper for rogue and corrupt companies fleecing Kenyans. They are now acting “concerned” over cyber-bullying, yet the same pieces of shit have stood by and watched as telecommunication company Safaricom rob customers in broad daylight using bogus promotional scams, exorbitant fee’s and anti-competitive practices, without saying a word.

The hypocrisy is nauseating! Of all people, Communication Authority of Kenya (CAK) who are actually a department of Safaricom Limited, now claim to care about our welfare? What a truck-load of horse-shit!

This regulator should be disbanded for failing to execute it’s mandate of controlling and regulating rogue telecommunications companies like Safaricom.

For the record, Facebook have their own Policies which guard against the infringement of rights or contravening universal laws on Internet usage. So Kenya cannot be so special as to demand higher standards of Internet usage. People have done far much worse things like livestream murders, or solicit for underage sex. Those are criminals that exploit social media. It’s not social media that kills.

CAPTION: NMG journalist Elvis Ondieki told Buyer-Beware admits that he was simply rushing to meet a deadline. The story lacked depth and coherence.

All bloggers should stand United against this affront on our rights to engage by a dying media house and an incompetent regulator that turns a blind-eye on crimes committed by Safaricom. Regulation, legislation are not a quick-fix panacea but always create room for more corruption as key players seek to by-pass and make money.

We can’t fail to draw parallels between the current clamor for regulation of social-media, to the Government’s public statements on their intent to enforce an Internet blockade during elections, to guard against the risk of a people’s revolution in case Jubilee steal the elections.

This cannot be a coincidence.

The worst part is that the death of the woman, the alleged molestation of her child, have all been swept under the carpet by NMG and CA, as both parties pursue their selfish agenda, all at the expense of the dispensation of justice.

Bogus mainstream media journalists like Victoria Rubadiri and her staged guests yesterday claimed that Buyer Beware group administrators charge people to post comments on the influential group. And what’s the problem with that? Aren’t Rubadiri and Co., bribed to run toxic narratives by various interests groups?

Remember Kenyans, this story first ran on Nation Media Group, which has an active partnership with Communications Authority of Kenya. CA have been sponsoring Larry Madowo’s show “The Trend” for a long while and this current narrative is their desperate attempt to curtail social media’s exponential growth, which has made their company irrelevant in the grand scheme of things. 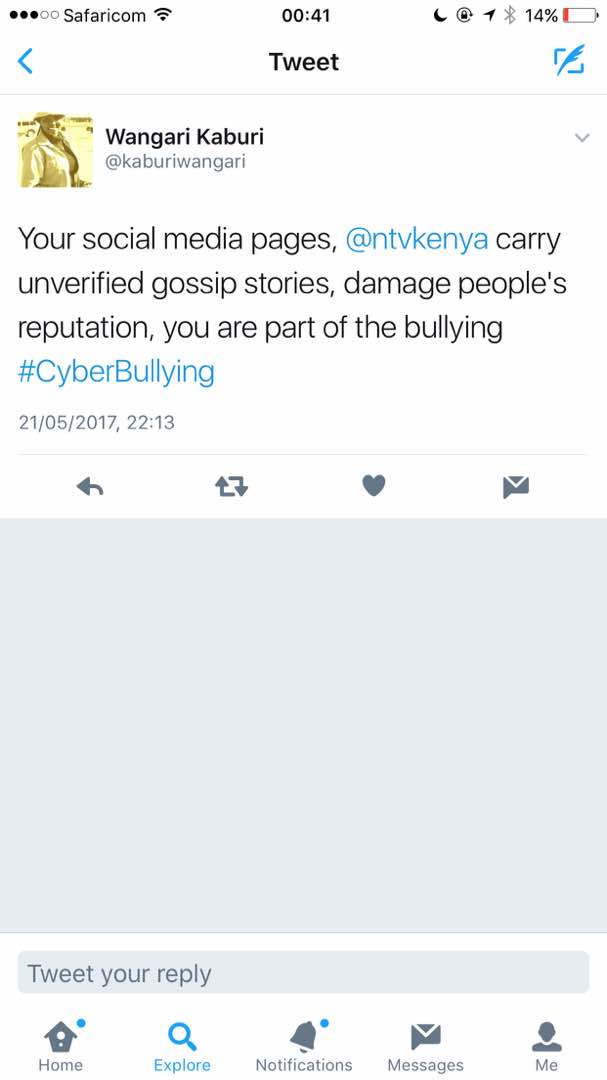 CAPTION: Kenyans are woke! Nation are some of the biggest enablers of fake news, yet now claim to walk the moral high-ground.

Lazy journalists cannot just be colluding with vested interests to influence policy for their own gain. One suicide caused by mental-health issues cannot be used make blanket-condemnation of all of social media. This stupidity has to come to an end. Everyone is blaming social-media for their own pitfalls and inadequacies, instead of confronting the real issues. Banks for instance, have kept whining about social media, yet it’s their corruption plus bad economic environment which has seen their profits dwindle.

Let us all unite under the hashtag #BullshitJournalism to condemn Nation Media Group for being bribed by Communication Authority, so as to front interests of the status-quo, aimed at an Internet blockade during elections. It’s time for the  likes Robert Alai to stand up and stop being misused by mainstream media. This media hates bloggers and must be shunned by bloggers.

Again, we reiterate that Victoria Rubadiri’s misguided performance onset is due to her perennial lacking of good dick. Chic needs to get laid asap and stop giving humanity grief over nonsensical topics like Cyber-Bullying. The Internet is a free place and anyone that posts comments on a public platform should not dictate the type of answers they will receive.

If that lady wanted help to deal with issues on Mental Health, she would have posted on a related page, where help and counseling are offered. 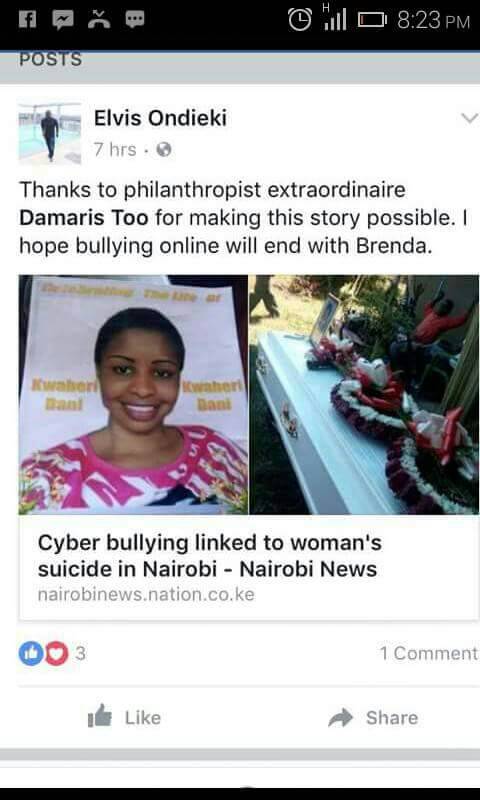 CAPTION: Damaris Too, the staged puppet-guests on NTV’s show is now being regarded as philanthropist-extraordinaire. Probably because of giving Elvis Ondieki free sex.
Would you like to get published on this Popular Blog? You can now email Cyprian Nyakundi any breaking news, Exposes, story ideas, human interest articles or interesting videos on: [email protected] Videos and pictures can be sent to +254 710 280 973 on WhatsApp, Signal and Telegram.