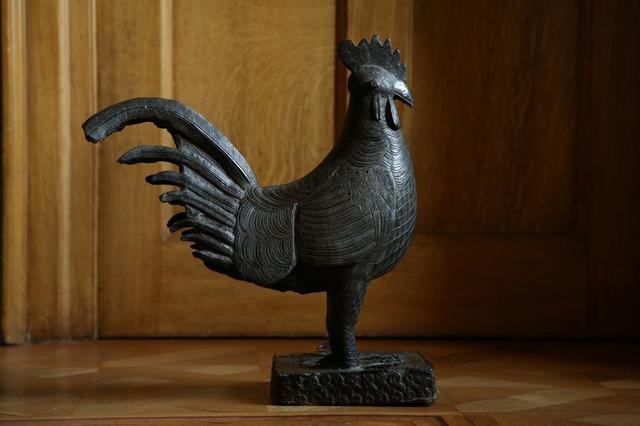 CAPTION: A Benin bronze cockerel that is to be repatriated to Nigeria from Jesus College, Cambridge University.

A Cambridge University college said on Thursday it would return an antique statue of a cockerel to Benin City in Nigeria, more than 120 years after it was looted by British colonial forces.

The move by Jesus College will likely step up pressure on other institutions holding plunder from the historic Kingdom of Benin and other objects from other cultures taken by colonialists during the 19th century.

Nigeria said it was delighted by the announcement and launched a broad appeal for museums across the world to return its heritage.

“Considering the hundreds of Benin Bronzes looted during that occupation, the decision to return the cockerel is like a drop in the ocean, but it is an important drop and we welcome it,” the Minister of Information and Culture, Alhaji Lai Mohammed, said.

Jesus College staff said research had shown there was no doubt the cockerel had been looted from the Court of Benin, the seat of the once-mighty West African kingdom.

“This royal ancestral heirloom belongs with the current Oba at the Court of Benin,” the college said on its website, referring to the traditional and still influential ruler of what is now part of modern-day Nigeria.

British museums have long resisted campaigns for the return of Nigeria’s Benin Bronzes, Greece’s Elgin Marbles, Ethiopia’s Magdala treasures and other loot, often citing legislation that bans them from disposing of their collections.

But the debate has heated up in recent years, particularly in Britain’s universities, where students and campaigners have called for greater recognition of how the colleges benefited from colonial-era riches and funding.

Jesus College said on Thursday that from now on it would “acknowledge and contextualize” the role in its history of Tobias Rustat, a major 17th century benefactor who benefited from the transatlantic slave trade.