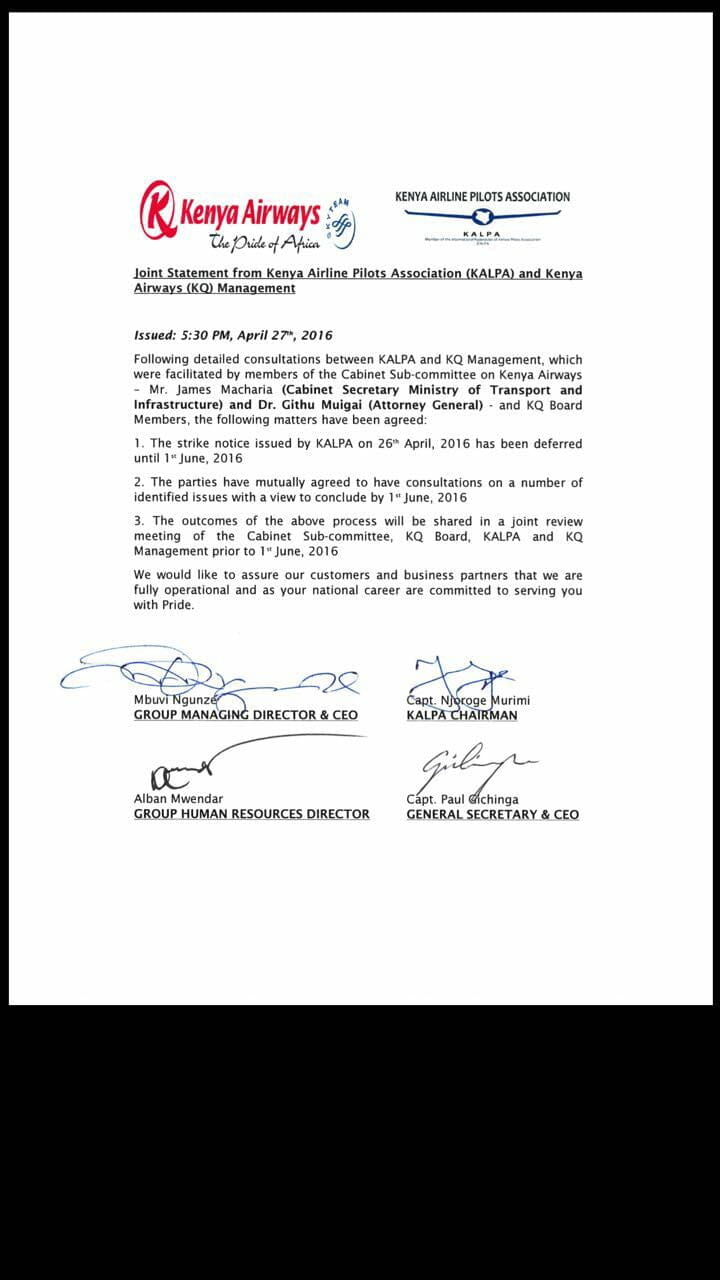 We recently profiled doctors union Kenya Medical Practitioners and Dentists Union (KMPDU) who were bribed to call off a strike in the year 2011, a strike that if seen through to its logical conclusion would have changed the face of the medical sector in Kenya.

Young Kenyans consciously opted to put their stomachs and personal interests first, beyond that of National good and posterity. The new breed of young Kenyans that we have are very narrow-minded, short-sighted and hopelessly pathetic, because unlike former top trade-unionists like Ronald Ngala who articulated workers rights with authority, we now have young Kenyans who call off strikes after being bribed.

Captain Njoroge Murimi, Captain Paul Gichinga and Alban Mwanda today let down pilots of Kenya Airways and are now threatening the families and livelihoods of many more who stand to be retrenched due to Kenya Airways’s CEO Mbuvi Ngunze’s incompetence. Instead of standing with the people, they are belching out money tonight, indulging in fine whiskies. Bunch of idiots!

Today was supposed to culminate in a pilots strike called by Kenya Airline Pilots Association (KALPA), supported by over 400 strong pilots who have had enough of Mbuvi Ngunze’s bullshit. They know that his continued stay at Kenya’s flagship airline will definitely resilt in its collapse, and had unanimously endorsed the strike.

The three individuals were “summoned” to the Attorney General’s chambers and what transpired has left aviation industry operatives disgusted by the sheer greed and lack of commitment in the part of the officials. Money is said to have changed hands and the officials were explicitly asked to buy time for Mbuvi to execute the retrenchment of pilots and other technical staffers.

And just like that, an industrial action that was meant to secure the jobs and save a dying airline was mitigated, so that a few people who have leased planes to KQ using Mauritian shell companies can continue benefiting. Very short-term interests that at the end, will see the airline collapse completely, and many more lose their jobs.

So the Kenya Airways strike is still on.