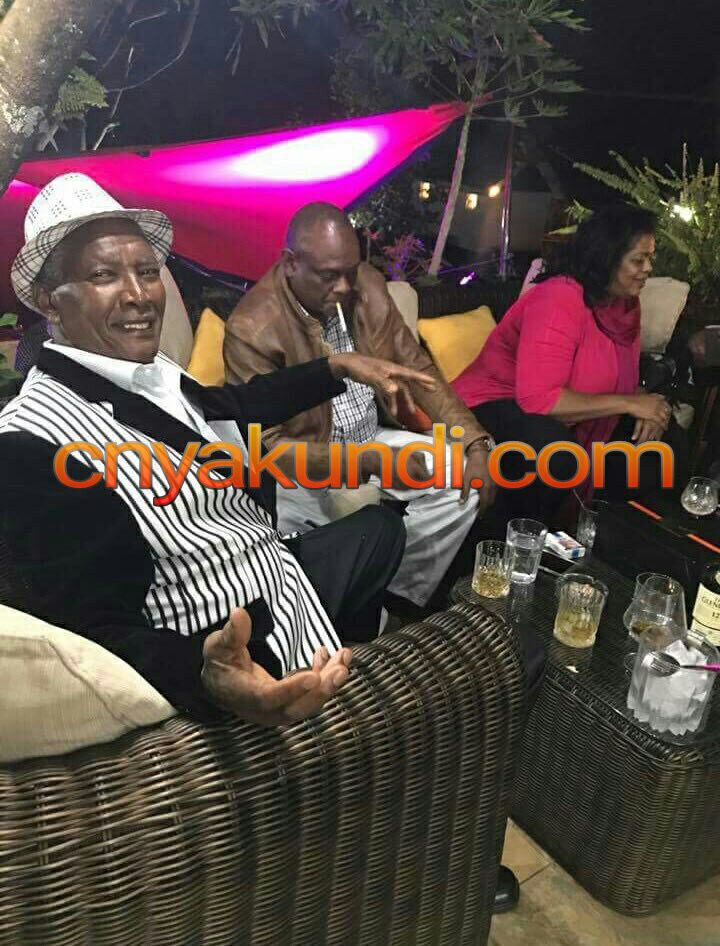 The senior-most Jubilee Official who does the dirty work for defact President of Kenya Muhoho Kenyatta, was caught on camera, wining and dining with a Supreme Court Judge.

David Murathe, Jubilee Party Vice Chairman and errand boy to Muhoho Kenyatta, was said to have been delivering bribes to the judge, in a bid to purchase a dissenting opinion in the forthcoming petition lodged by the National Super Alliance (NASA).

Murathe has been on the news of late, after residents in his native Gatanga constituency, raised doubt about his sudden source of wealth, after building a massive mansion which has played host to none other than the Head of State himself Uhuru Kenyatta.

Uhuru’s brother Muhoho is considered as Kenya’s de-facto President, because it is said that when Uhuru is drunk or unable to wake up, national issues are bounced off his brother. The powerful individual was behind the arrest of blogger Robert Alai, who spent a night behind bars for revealing pictures of the “royal” family at Nairobi Hospital, after the death of Muhoho’s mother in-law.

Speculation is rife that typical of their nature, the Kenyatta’s have used and are ready to dump Alai for being a liability due to his unpredictable nature. Alai is now living in fear, afraid of encountering the same fate as deceased blogger Bogonko Bosire, who was sold out to his murderers by his “best friend” Dennis Itumbi.

The Kenyatta’s like working with people they can control, and abhor the notion that someone can benefit on their account, a trait they acquired from the matriarch of the family Mama Ngina.

Which is why anyone who works for the Kenyatta family is broke, and Murathe has made his money from Chinese contractors who give him kickbacks in exchange for access to senior Government officials. He is also said to be constructing flats off Garden Estate Road.

Prior to 2013, Murathe was living off hand-outs from Muhoho, and personally engineered the removal of Sakaja Johnson from the Jubilee Party, so that he can be part of the nominations gravy-train that made Sakaja become an overnight millionaire. Sakaja got so many bribes in the 2012 nominations of TNA, that he purchased a residence in Nairobi’s Karen estate.

Njoki Ndungu is one of the foremost proponents of toxic-feminism and shot to the limelight after nomination to parliament in 2003 by virtue of being the Mpango Wa Kando to the then power internal security minister Christopher Ndarathi Murungaru. Murungaru was banned from ever setting foot in the US and the UK due to massive corruption allegations levelled against him.

She is known to have sexual relations with a senior Jubilee Official and is an alcoholic and chain-smoker who miraculously gave birth in her old age. Many thought that she was incapable to have a normal pregnancy due to the fact that she had squandered her youthful years partying with older married men.

Feminism in Kenya as espoused by senior female figures like Zipporah Kittony, involved “independence” to allow women to live like men. Which meant drinking and smoking like men, partying, sleeping with multiple partners and absconding family duties. This was a role that Njoki Ndungu embodied, and still does.

This is a clear connection of socio-economic ties between the Jubilee Party and the Supreme Court, which are grounds to petition Chief Justice David Maraga to reconstitute the bench. It seems like Jubilee already have one foot in the victory.