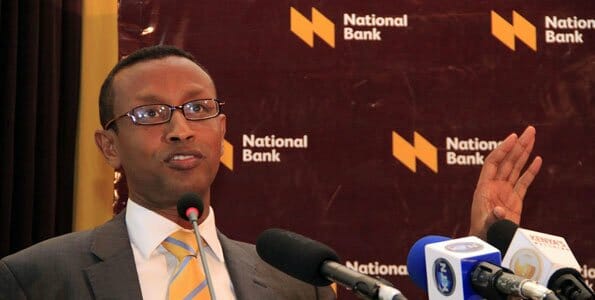 The National Bank of Kenya Board has relieved Munir Ahmed off his duties as CEO of the collapsing bank, this website can exclusively reveal.

The irony of this publicity stunt is that the National Bank board has also been infested with crooks, beginning with the Chairman Mohammed Hassan, who learnt the art of corruption and corporate fraud from Jimnah Mbaru, during his tenure as head of Dyer and Blair Investment Bank.

Mbaru like all Jubilee thieves allied to President Uhuru Kenyatta including Chris Kirubi, mentored Hassan who oversaw the death of National Bank, by being Munir Sheikh’s godfather as the latter executed industrial-scale heists by manipulating accounts.

Mohammed Hassan was also named as being an accessory in an 100 billion case involving Bluebird Aviation Company based at Wilson Airport.

Sources say that together with another director and silent thief Boniface Biko, Munir Sheikh and his Chairman Mohammed Hassan illegally oversaw a fraudulent loan of Kshs. 2 Billion given to BOMA Hotel owned by Kenya RedCross, due to close family ties with its CEO Abbas Gullet. The loan was bought from Equity Bank and no interest has been charged on it.

Abbas Gullet will be remembered as the individual who supplied aflatoxin maize to the #Kenyans4Kenya citizen initiative spearheaded by Safaricom CEO Bob Collymore, where millions of shillings went to waste in purchasing condemned maize.

BOMA Hotel is said to be going under receivership soon.

Within 4 years, Munir Sheikh has overseen the loss of Kshs. 34 Billion that Reuben Marambii had accumulated during his tenure at the bank. Salaries since December have been paid from loans to the bank, and word doing round is that Munir and some unnamed Arabs want to start their own Shariah Bank in Nairobi.

Central Bank of Kenya is expected to release audits of National Bank between this week and next week, and losses amounting to Kshs. 4 Billion will be tabled. The laptop used to manipulate figures was confiscated by Central Bank last December.

When the scandal blew up last year, a ScanGroup employee @iwateba immediately launched a hashtag #MunirisClean, showing how corrupt corporates use PR firms and business journalists to clean up their fraudulent activities.

Other directors of National Bank like seasoned thief and heckler Francis Atwoli were silenced with brown envelopes.