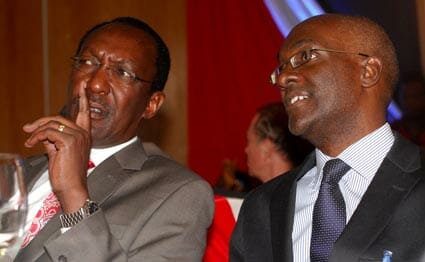 Caption: Titus Naikuni and his understudy Mbuvi Ngunze who has taken Kenya Airways to record lows. He has resigned with immediate effect.

Exclusive reports reaching the Cyprian Nyakundi newsdesk indicate that the Managing Director of Kenya Airways Mbuvi Ngunze has resigned. The news is set to be officially announced tomorrow after consultations with Government.

Mbuvi Ngunze who replaced Titus Naikuni as the CEO of the publicly-listed Kenya Airways, has been accused of corruption, cronyism and redundant ideas which seems to have cost the airline millions of dollars in losses, and compromised the turnaround-to-profitability project.

Ngunze recently oversaw the fraudulent sale of Kenya Airways prime landing hub at Heathrow Airport, and later bribed journalists like Terryanne Chebet of Citizen News to hype it as a visionary idea.

The man from Kamba land also oversaw the dubious leasing of aircraft that Kenya Airways  also leases (double-leasing), which still cost the money a monthly half a million dollars in fee’s.

The same Kamba character has also overseen flight stationed at what is called the KQ graveyard, where over 11 aircrafts are grounded due to lack of business, but the company still pays leasing fee’s for them to Mauritian companies connected to powerful Statehouse forces.

Transport CS James Macharia is said to be declining to accept the resignation, and has pledged to rush to Statehouse and pursue an intervention. But surely who is more important, pilots and passengers or one individual we ask?

Can shareholders start making noise. Why is Transport CS James Macharia holding the country hostage? If Mbuvi Ngunze has resigned, why do you want to keep him in office any longer? Why should passenges endure cancelled flights? Why must Kenya lose out?

We petition the useless MPigs whose work is stealing taxpayers money, the incompetent opposition, to call for the removal of Transport CS James Macharia.