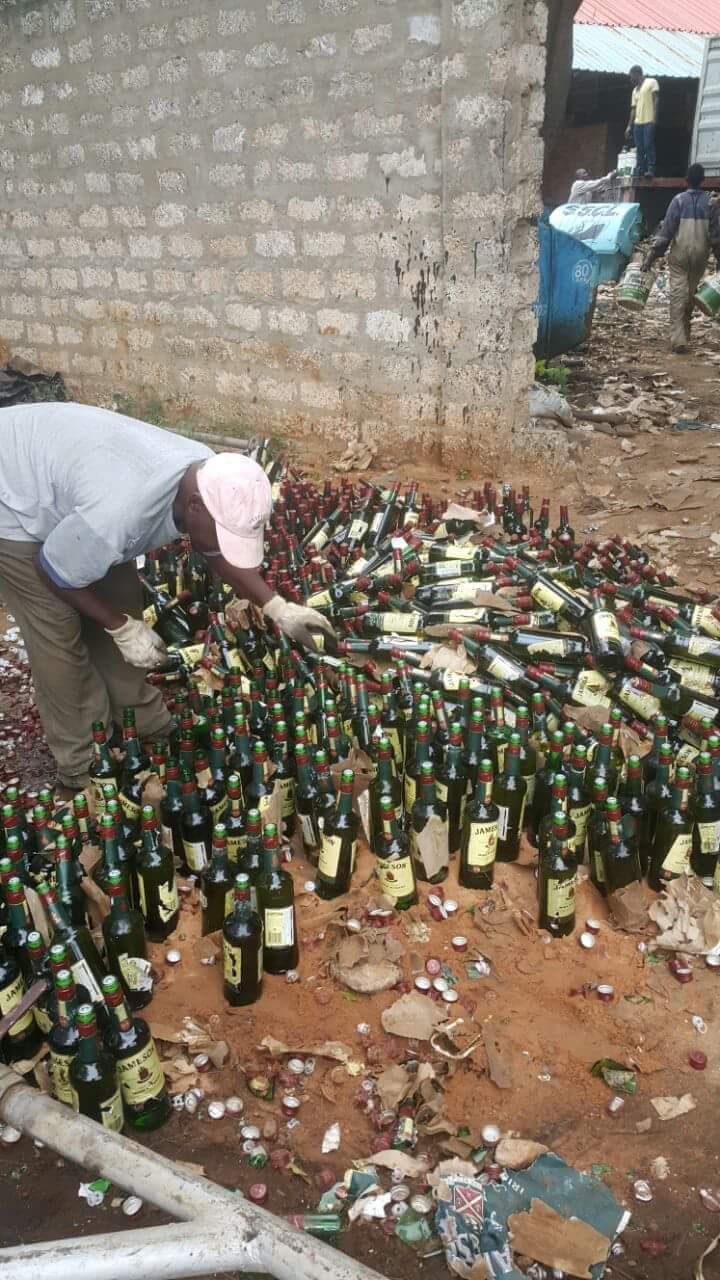 CAPTION: Jameson counterfeits which were impounded at an illegal-distillery in Nairobi.

If there’s a product that has been counterfeited in Kenya, it has got to be Jameson. These days, Kenyans have started giving the drink a wide-berth due to the hangovers it precipitates.

The truth is that 60% of the Jameson in the market is Chang’aa which has been distilled in counterfeit outfits, many located in the Kariobangi area of Nairobi.

Due to lax enforcement of Standards, the drink is largely compromised which is the reason why many of you spend an entireSunday like today in bed, nursing a hangover, instead of being productive and visiting the outdoors like the museum, parks, giraffe center, etc.

But what if the Government largely comprising of stupid and retarded old men, re-thought their engagements with these cottage industries? I mean if people in Kariobangi can can make a near identical drink like Jameson, what more can they achieve if they were supported, trained, equipped, funded?

But the problem is this Government is littered with idiots who cannot use the white matter in their heads for its intended purpose. Their first instinctive reaction is to raid such distilleries and have them shut-down.

Government in Kenya largely preoccupies itself with frustrating efforts by independent creatives and entrepreneurs, due to their demonic obsession with foreign investors. Neo-colonialism.

But we all know that East African Breweries Limited (EABL) dispatched a delegation to Statehouse, imploring on the powers that be, to shut down the so-called 2nd generation brewers in counties, because they were threatening their business and bottom-line.

And Uhuru, being a neo-colonised bootlicker was only happy to dispatch MPigs to raid factories, which are big investments acquired abroad, so as to impress and make EABL happy.

The idiots who are in this Government are too many. Their reasoning capacity is worser than that of an autistic child. They’re quick to make the business climate favourable for foreign investors, but harass local investors all the time by sending Kenya Revenue Authority to harass them, or Kenya Bureau of Standards to extort them.

We have also seen retarded old pieces of shit like Muhammad Swazuri stealing land by local investors yet he’s an occupant of a constitutional office.

Kenyans arise! We cannot be paying taxes to a Government whose main preoccupation is to frustrate it’s own citizens. And the Government should be exploring ways to elevate our cottage-industries to go regional/global, instead of bootlegging Jameson.

And that can’t be achieved by harassment, intimidation, cheap threats by provincial administration and the likes. A fucked-up Jubilee Government.