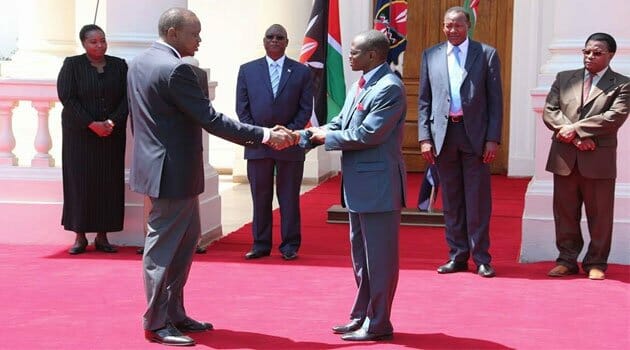 “It is indeed true that I am a very kind person, quite calm and even reserved… but that is the face that you see. Behind that, is a very hard man,” the incoming Inspector General of Police Joseph Boinett told the joint committee of the National Assembly and Senate on security.
“All those attributes have been poured to me because I do not tolerate nonsense from anybody; I do not accept mediocrity.”

Boinett told the committee during his vetting on Thursday that his priority in office will be to fight impunity and corruption within the police service which is said to have contributed to rising insecurity in the country.

“I intend to confront those entrenched cultures of impunity, human rights abuse and corruption head on and I am ready for whatever consequences,” he warned.

He plans to have collaborative leadership in a bid to ensure everyone perform their duty through consistent structured dialogue, engagement with members of the public and encourage the culture of communication both internally and with other external security agencies.

Boinett was tasked to explain how intends to tackle various challenges facing the security sector in the country with issues of corruption, terrorism, cattle rustling, police capacity and illegal groupings in the country being extensively covered.

Police have been accused of not acting on intelligence or ignoring warnings, a matter he said will be a thing of the past.

“I intend to employ intelligence led policing and rational use of available resources however meagre they may be,” he stated.

Committee members pointed out the killings of a 100 people in Mpeketoni area in Lamu County and also the Westgate attack as incidences where police failed to act early despite receiving intelligence of the imminent attacks.

Boinett however attributed this, “to mistrust” among the members of the two services saying, “It’s because they did not understand the role of each sector.”