In September, Siaya Senator James Orengo had gone to court on behalf of the Asian owned Crossley Holdings Limited, claiming ownership of the controversial 10,000-acre parcel of land that Miwani Sugar Company sits on.

However, yesterday the Ministry of Agriculture clarified that Senator Orengo’s client Crossley Holdings Limited had acquired the disputed land irregularly and through a fictitious process.

The Asian firm-Crossley Holdings Limited, that had petitioned to be refunded Ksh6 Billion suffered a great blow after the Ministry- on behalf of the State, initiated a process to forcefully repossess the 10,000 acres of land belonging to the collapse sugar miller Miwani Sugar Company Ltd.

In a meeting at the august House, Agriculture PS Hamadi Boga told the National Assembly’s Agriculture Committee that the ministry was liaising their counterparts in Lands and NLC to revert the disputed parcel back to Miwani Sugar before the planned leasing.

According to PS Boga, the ministry’s legal team and the receiver-manager of the miller held a meeting last month at Ardhi House with Lands PS Nicholas Muraguri and discussed rather agreed how to revert the land to the company for cane farming.

“The PS (Muraguri) has directed that we immediately lodge the original title together with the supporting documents so that provisional Title issued to Crossley Holdings Limited can be cancelled and to pave way for the transfer to Miwani Sugar (1989) Limited,” Mboga told the committee.

In the petition seen by cnyakundi.com, Senator Orengo’s clients not only wanted the land LR No 7545/3 that is currently occupied by illegal settlers after the miller stopped operations reverted back to them but had also demanded Sh6 Billion from the miller.

Alternatively, the firm wanted Sh4.6 billion being the current market value of the land with interest from the date of filing the petition until payment in full and any other loss of income incurred until the petition is heard and determined. 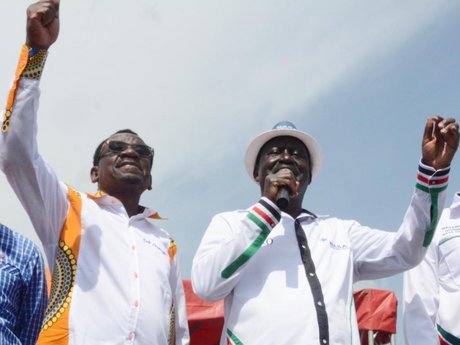 Raila Odinga’s close- Siaya Senator James Orengo- ally had professionally gone behind his ‘political boss’ back in a case that is creating a twist in the planned leasing of the state-owned sugar factories.

We understand that the former PM Raila Odinga is fronting the privatisation of collapsing Muhoroni, Miwani, Chemelil, Sony and Nzoia Sugar Companies.

But documents tabled before the committee chaired by MP Silas Tiren (Moiben) show the land LR No 7545/3 was fraudulently sold to Crossley Holdings Limited in December 2007 following a court order in 1993. But, the sale was later vacated after it emerged that it did not follow the law.

In a case filed by then, operational-now collapsed- Miwani Sugar, the court ruled in June 2008 that Crossley Holdings Limited acquisition of the land was null and void.